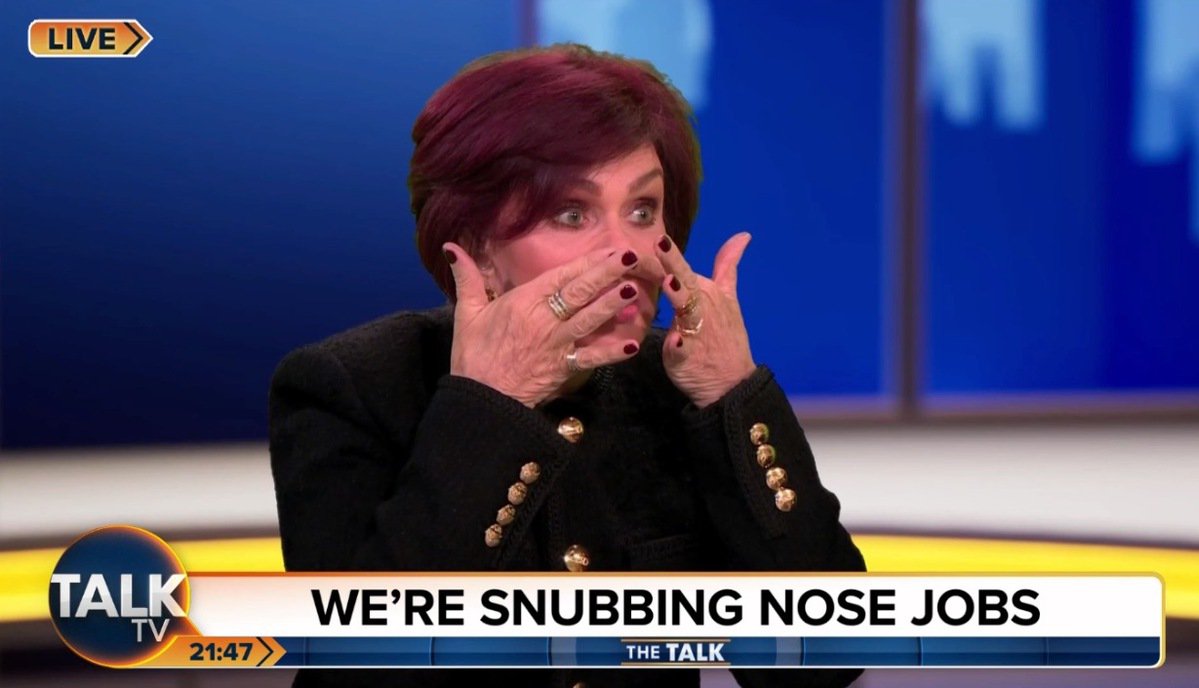 Sharon Osbourne has addressed her recent face lift during the opening episode of her new TalkTV show, joking that she had to hold her nose in place to ‘stop it falling off’.

The TV personality recently opened up about the cosmetic procedure she underwent seven months ago, saying that she found the results ‘horrendous’ as she was left resembling ‘Cyclops’.

The former X Factor said that her face was ‘settling now’ after going under the knife, having spent five and a hours in the operation.

During the first episode of her new programme The Talk, she and her fellow panellists Jeremy Kyle, commentators JJ Anisiobi and Esther Krakue and actor Nicola Thorp discussed their personal views on plastic surgery.

Sharon, 69, emphasised how much pain she was in when she had her ‘whole face done seven months ago’, stating: ‘It was the most… as you get older, believe me, it gets worse, the pain. It was excruciatingly painful.’

She then placed her hands over her nose, joking: ‘See, I’m holding my nose on so it doesn’t fall off,’ as her co-stars chuckled.

Sharon also revealed how her family feel about her cosmetic procedures, admitting that neither her husband, Black Sabbath frontman Ozzy Osbourne, nor their three children are fans.

‘I do it for myself. My husband doesn’t like it and my kids really hate it. I do it for my own ego,’ she told the co-hosts.

When Sharon opened up about her face list to The Sunday Times, she said that when Ozzy saw it, he agreed it wasn’t up to par.

Sharon’s return to TV came following her exit from US show The Talk last year, when she was fired after becoming embroiled in a row about racism.

During her first episode of TalkTV’s The Talk, she called for Prince Andrew to be ‘locked up’ after ‘disgracing’ the royal family following the sexual assault lawsuit.

She also raved over how ‘attractive’ she found Russian president Vladimir Putin when he was pictured riding a horse topless in 2009, saying that in her opinion, the politician – who is currently waging war in Ukraine with his Russian forces – ‘looked insane’.

The Talk airs weeknights from 9pm on TalkTV.