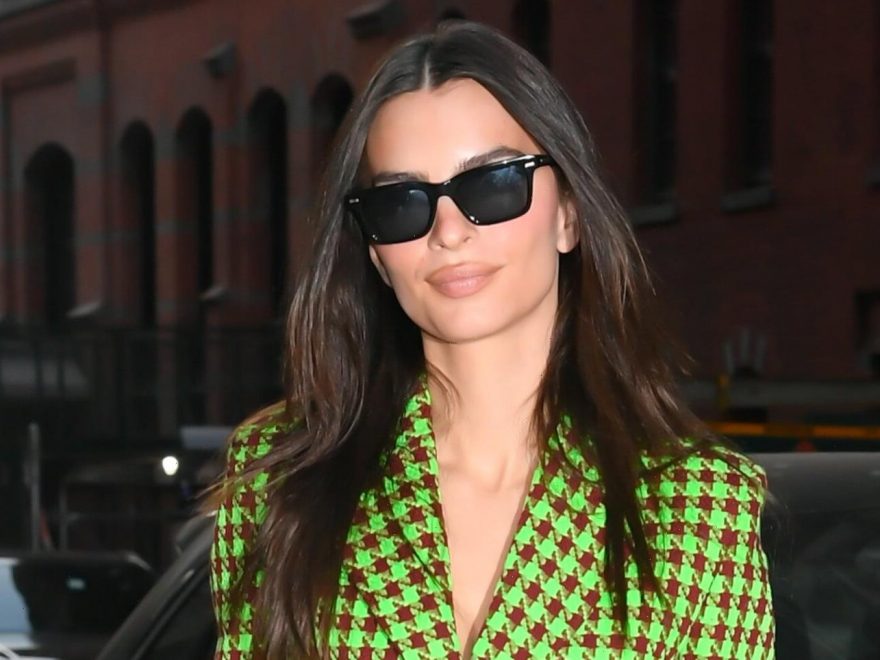 Newly minted author Emily Ratajkowski celebrated the release of her memoir, My Body, with a fashion tour de force in New York City. One of the standout outfits included a sweet mint-green and chocolate-brown houndstooth jacket from Versace's Resort 2022 collection. While Donatella Versace showed the look with pants, Ratajkowski wore the bold jacket alone, skipping out on any visible bottoms (she wore very short white biker shorts under, FYI) and pairing the statement-making suiting with tall, white boots.

The blazer's houndstooth pattern may look dizzying, but the kept the rest of her look simple to keep it at the center of her ensemble. She didn't have a bag (and actually held her phone in her hand) and kept her sunglasses sleek and classic. Ratajkowski's essays included a reflection on her breakout moment, though she said that it did more than just put her name in the headlines.

"I wasn't just famous," Ratajkowski wrote in a chapter named for Robin Thicke's song, "Blurred Lines. "I was famously sexy, which, in many ways, felt gratifying." Her book also alleges that Thicke groped her on set.

"Suddenly, out of nowhere, I felt the coolness and foreignness of a stranger's hands cupping my bare breasts from behind. I instinctively moved away, looking back at Robin Thicke," Ratajkowski wrote, according to The Sunday Times. She also wrote that Thicke appeared to be drunk, something that director Diane Martel also mentioned.

"I remember the moment that he grabbed her breasts," Martel told the Times. "One in each hand. He was standing behind her as they were both in profile. I screamed in my very aggressive Brooklyn voice, 'What the f–k are you doing, that's it!! The shoot is over!!'"

During an appearance on People (The TV Show!), Ratajkowski talked about the idea of capitalizing off her looks and how it was empowering for her to be able to harness her sexuality. Upon reflecting on it, however, she said it wasn't as easy as just showing up and being sexy, saying, "I think that it's more complicated than that. I feel like I haven't been able to talk about that enough."