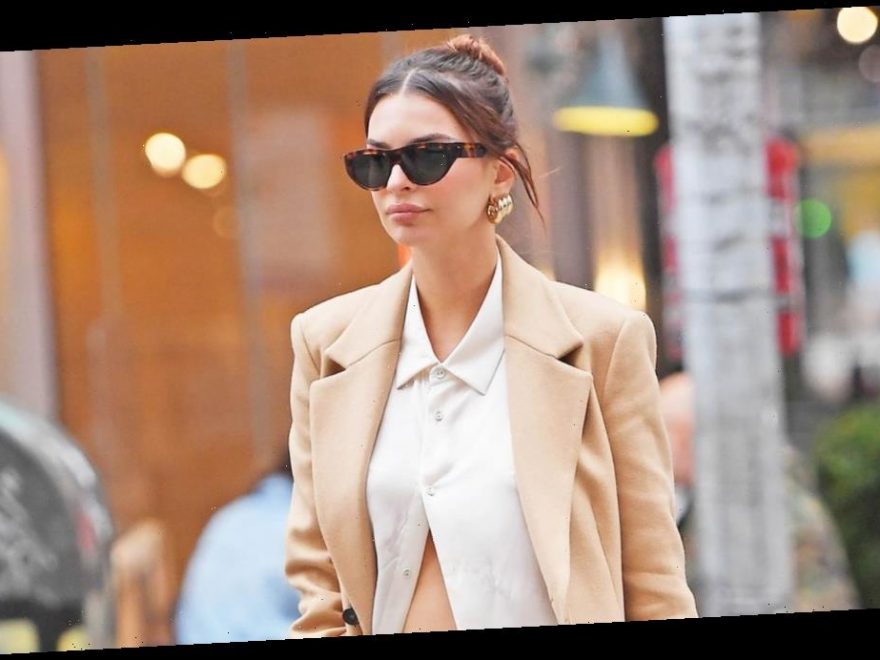 Emily Ratajkowski has been snapped showing off her blossoming baby bump while out in SoHo, New York.

The 29 year old model, who recently announced she’s expecting her first child with Sebastian Bear-McClard, kept her white shirt open to flaunt her bump as she walked along the street.

Emily wore a pair of blue denim jeans, which she tucked into a pair of brown knee high boots.

Meanwhile, she wore a long beige coat as the mum-to-be strutted through the city.

Model Emily, who recently showed off her bump in a revealing black dress, accessorised her look with a pair of dark sunglasses with a tortoise-shell patterned trim and a pair of large gold earrings.

She wore her brunette locks up in a bun and held her face covering and phone in one hand while making her way through New York.

Emily’s proud bump display comes after the star announced she is expecting her first child earlier this week.

The I Feel Pretty actress made the happy announcement on her Instagram feed as she shared a sweet clip of her cover with Vogue Magazine, putting her growing bump on display for her 26.8million fans to see.

She also shared a second video with the publication, which showed a compilation of moments shared between herself and Sebastian.

One scene showed her husband kissing her bump, another showed the brunette beauty completely nude as she cradled her tummy, while a third showed a clip from her unborn child's ultrasound.

In an essay, which she wrote to herself in the publication, Emil revealed she doesn’t yet know the gender of her unborn child and doesn’t plan to find out any time soon.

She wrote: “When my husband and I tell friends that I’m pregnant, their first question after 'Congratulations' is almost always 'Do you know what you want?' We like to respond that we won’t know the gender until our child is 18 and that they’ll let us know then.

“Everyone laughs at this. There is a truth to our line, though, one that hints at possibilities that are much more complex than whatever genitalia our child might be born with: the truth that we ultimately have no idea who — rather than what— is growing inside my belly. Who will this person be?

“What kind of person will we become parents to? How will they change our lives and who we are? This is a wondrous and terrifying concept, one that renders us both helpless and humbled.

“I like the idea of forcing as few gender stereotypes on my child as possible.”

Emily continued: “But no matter how progressive I may hope to be, I understand the desire to know the gender of our fetus; it feels like the first real opportunity to glimpse who they might be. As my body changes in bizarre and unfamiliar ways, it’s comforting to obtain any information that might make what’s coming feel more real.”

Emily and film producer Sebastian married in February 2018 after being romantically linked earlier that month.