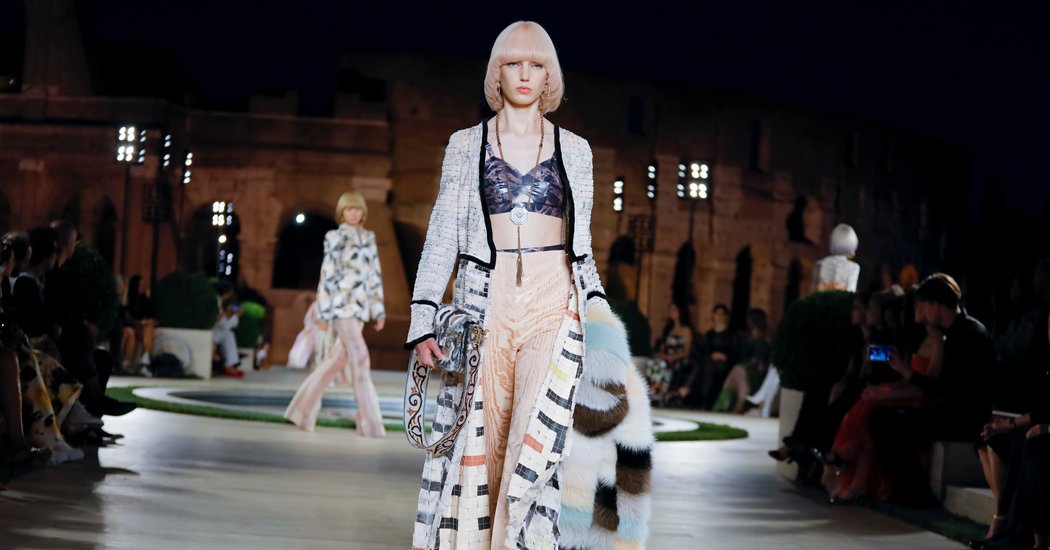 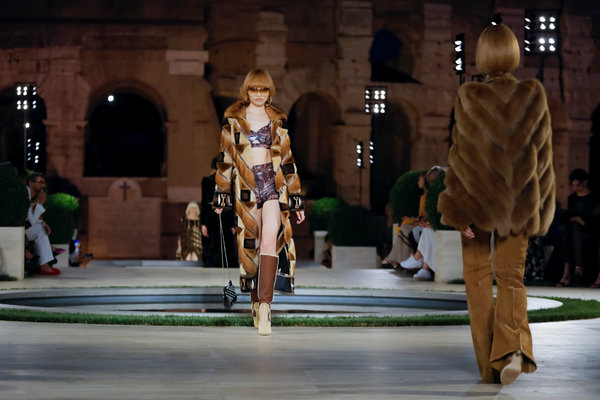 ROME — There has been some debate over how Karl Lagerfeld, former creative director of Chanel and Fendi, the man who essentially defined the role of the modern creative director until his death in February at age — well, no one is entirely sure; general guess is 85 — would have felt about the extravagant memorial held two weeks ago in Paris. He famously, after all, never wanted a grand public funeral. He hated looking back.

How would he have felt about the Fendi couture show held Thursday night at the Temple of Venus and Rome high atop the Palatine Hill in the Italian capital, the uplit arches of the Colosseum serving as backdrop, the moon lighting the paths — a show meant to be not a retrospective but rather a homage to the values he gave the brand (lightness, a sense of identity and history, a willingness to subvert all the bourgeois rules of fur) and a bridge to the future? That was a little easier to imagine.

He would have loved it.

He loved the idea, anyway, according to Serge Brunschwig, Fendi’s chief executive, when Mr. Brunschwig first proposed it a while ago. Fendi has made something of a fetish of its Roman roots, and has been embedding itself in the city for awhile now: It restored and now makes its headquarters in the Palazzo della Civiltà Italiana, a travertine architectural monument with six floors of grand arches on every side, initially commissioned by Benito Mussolini to represent his new Roman empire. It gave $2.6 million to restore the Trevi Fountain — and then, in 2016, held a fashion show over its waters. And now it has committed €2.5 million to restore the Temple of Venus and Rome, the largest temple of ancient Rome, designed by Emperor Hadrian and consecrated in A.D. 121. This show served to both celebrate and publicize the relationship. As well as to suggest — implicitly, of course — Fendi as the emperor of Italian fashion.

“Karl used to say ‘Fendi is my Roman side,’” Silvia Venturini Fendi said backstage before the show. “It is impossible to do a show in such a place without paying homage to the setting and the city.” There had been some debate over when, exactly, it should take place, but after Mr. Lagerfeld’s death, Ms. Fendi said, “we decided we had to do it, and dedicate this show to him. It was a way of showing we are a good, tight team and have learned so much from him.”

So they did it.

They did it in 54 looks, one for each year Mr. Lagerfeld worked at the company. They did it in extraordinary intarsia sables and minks inspired by patterns on the temple floors and ceilings, shaved and printed and marbleized and then cut into mosaics and pieced together in elaborate geometric patterns on tulle. They did it in organza and mousseline ball gowns printed to resemble the same inlaid stone effect and constructed to float around the body like parachutes before they touch the earth. In louche 1970s flares and matching jackets and big Betty Boop bikini briefs with 1950s bra tops under sweeping leather coats intricately cut to look like tiles. In delicate bias dresses embroidered with raffia sheaves of wheat and waving wildflowers inspired by a book on the Viennese Secession movement that Mr. Lagerfeld gave Ms. Fendi the last time they met, and by period figures like Hoffmann, Wagner and Klimt. And in narrow day dresses like columns made from wool sliced into different geometries and set on tulle, the better to cool the body.

They did it in clothes that were half fur (Mr. Lagerfeld had introduced the concept of a “haute fourrure” show in 2015, when it was met with graphic protests), and half fur-free. Fendi is one of the few brands that continues to declare its allegiance to the material — it began life, after all, as a family fur house — but even Fendi has to begin to move in some different directions (it is now, for example, haute couture). As to what happens next, no one is entirely sure.

As Ms. Fendi, currently though not officially leading the brand forward, acknowledged. “I called the show ‘The Dawn of Romanity,’” she said. “It represents a new chapter.” Once upon a time for a city, and now for a house.

Vanessa Friedman is The Times’s fashion director and chief fashion critic. She was previously the fashion editor of the Financial Times. @VVFriedman