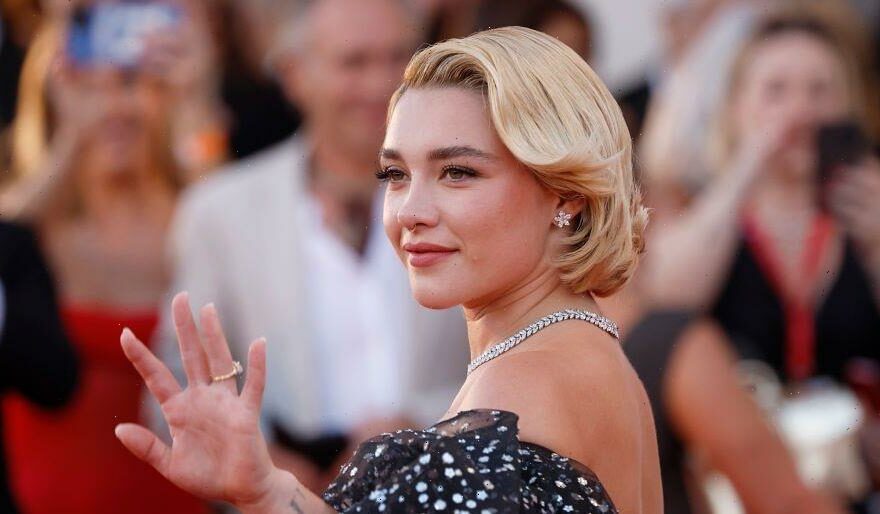 Unless you’ve been living under a rock, you know that Florence Pugh is a certifiable star who’s quite literally the epitome of booked and busy with all of her projects (read: major blockbusters). In 2019, the English actor starred in the biographical sports dramedy Fighting With My Family, which premiered at the Sundance Film Festival and received rave reviews. Based on the original Max Fisher documentary The Wrestlers: Fighting with My Family, the film also costarred Jack Lowden, Lena Headey, Nick Frost, Vince Vaughn, and Dwayne Johnson. Pretty sick first big gig, right?

Not to be outdone by, well, herself lol, Florence followed up with a leading role in Ari Aster’s horror film Midsommar, which I still have nightmares about. Then, the actor signed on to play Amy March in Greta Gerwig’s adaptation of the classic novel Little Women alongside a slew of famous face, including Saoirse Ronan, Emma Watson, Meryl Streep, Timothée Chalamet, and Laura Dern. The film *also* scored Miss Flo an Oscar nom for Best Supporting Actress in 2020, because duh.

More recently, Florence has been in an interesting, erm, entanglement with her new film Don’t Worry Darling, but we’ll get into all of that later! Mkay, so now that we’re all caught up to speed on her v impressive resume, let’s get into how it translates to major $$$.

Florence Pugh made her Marvel debut in 2021’s Black Widow, playing Yelena Belova alongside the film’s lead Scarlett Johansson. Needless to say, she absolutely crushed it and earned tons of positive reception—so much so that she reprised the role in the Disney+ series Hawkeye alongside Jeremy Renner’s Clint Barton and Hailee Steinfeld’s Kate Bishop. And with the MCU looking ahead to its next slate of projects, it’s suspected that Florence’s character will be popping up once more. 👀

In a recent appearance on The Town, Deadline‘s Justin Kroll hinted that Yelena is expected to lead the MCU antihero team in the upcoming Thunderbolts movie. “[Florence] has got the Marvel superhero that’s already got a spin-off,” said Kroll. “Upcoming for her, actually, on that character is this Thunderbolts film, which is basically Marvel’s Suicide Squad. Hopefully, it has better results. But the concept is it’d be her leading the team of like Wyatt Russell’s John Walker, Daniel Bruhl’s Zemo, those antiheroes that aren’t exactly good but aren’t exactly bad. So there’s that. And people seem to like the Yelena character,” he finished.

Sadly, we don’t know how much $ Florence made in Black Widow or what she’s expected to bring in for Thunderbolts. That! Said! We can guesstimate based on how much her fellow MCU stars have made on their debut solo films. Case in point? Captain America’s Chris Evans and Thor’s Chris Hemsworth each received an estimated $300,000 and $150,000, respectively, for their first movies in the MCU.

Exactly how much $$ Florence earned for her *chef’s kiss* performance in Midsommar is questionable at best. But considering the fact the movie was an indie reportedly produced for a budget of $9 million (later earning $47 million at the box office), it’s safe to assume her takeaway was on the modest side. Even so, the role def helped Flo become a better actor and allowed her to bond with her cast in a truly unforgettable way.

In an Instagram post from last March, Florence detailed how difficult one pivotal scene was to shoot, and how much she leaned on her female costars. She shared a behind-the-scenes pic of her and the other actors holding each other and crying as soon as it was over:

“This was THE scene,” she shared. “The scene which, all who were included knew exactly how many days there were until we shot it…I’ve never been an actor that finds it easy to cry on camera. It’s something very personal to me and despite finding other aspects of acting exciting and thrilling, I find crying very scary and at some points in my career directors having to change the scene because I couldn’t do it.”

She continued, admitting, “On this film, in this scene, I found a true sisterhood. We all looked at each other before we started rolling and knew it would be hard. And awkward. And strange. And unnatural. We knew it wouldn’t be pleasurable. But by the end we were all in each other’s laps and crying and allowing our bodies to keep heaving.”

*Le sigh* Once again, there are no exact numbers on how much the actor was paid for her Oscar-nominated (!!) role in 2019’s Little Women. However, the film reportedly had a budget of around $42 million and grossed over $206 million, so it def wasn’t nothing considering Florence played one of the lead sisters. Aaaaaand she also got to share a set with Timothée Chalamet, which is pretty #priceless if you ask me ¯\_(ツ)_/¯.

The dumpster fire/IRL soap opera that is Don’t Worry Darling is still a movie at the end of the day! And that, dear reader, means Florence will still get paid for her phenom performance. However, there’s def some *looks up synonym for “drama”* *decides against it* drama when it comes to how much the celeb earned. 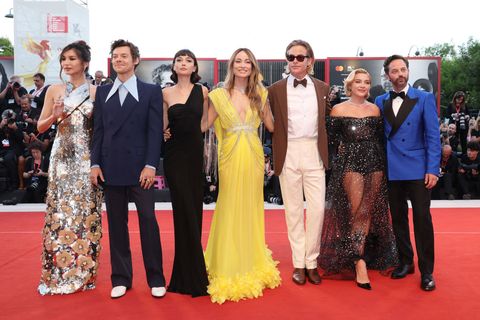 It was initially rumored that Florence was paid $700,000 to take on her lead role—a total that’s roughly a third of Harry Styles’s reported take-home of $2.5 million. However, those reports have since been disputed by director Olivia Wilde. In an interview with Variety, Olivia said, “There has been a lot out there that I largely don’t pay attention to. But the absurdity of invented clickbait and subsequent reaction regarding a nonexistent pay disparity between our lead and supporting actors really upset me. I’m a woman who has been in this business for over 20 years, and it’s something that I have fought for myself and others, especially being a director. There is absolutely no validity to those claims.”

Case = solved! And now we know two things for sure: (1) According to Olivia, her pay seems to be fair, and (2) The movie has the Kim K seal of approval, so I simply must watch.

Sooooo what is Florence Pugh’s net worth in total?

Oh, just a casual $8 million, according to Celebrity Net Worth. And that checks out! Miss Flo has been hard and work and I, for one, thinks she deserves the world.