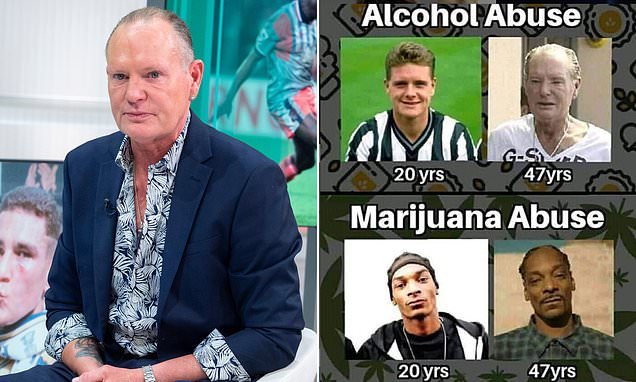 Paul Gascoigne has hit back at ‘f***ing’ Snoop Dogg after the rapper used a photo of him as a reason not to abuse alcohol.

The U.S. star, 47, was branded a ‘disgrace’ when he posted a snap of the former England footballer in his younger playing days alongside one of him aged 47.

One of the pictures, which was captioned ‘alcohol abuse’, was taken in 2014 just before he was admitted to hospital following a drinking binge.

Today, Gascoigne addressed the controversy on Twitter, writing: ‘Just back from doing charity work in Spain then just when U thought it was safe2get out of the water f***ing snoop dog turns up FFS SHANE [his manager] what’s he snooping about for [laughing, thumbs up, and heart emoji] from GAZZA x.’ 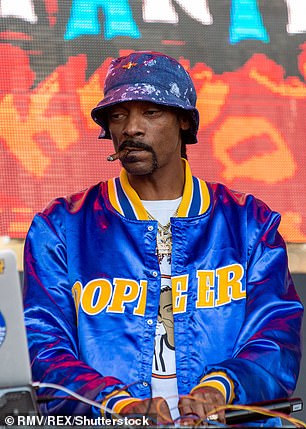 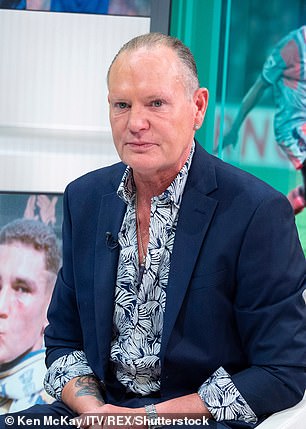 Backlash: Snoop Dogg has been branded a ‘disgrace’ by fans after using a photo of Paul Gascoigne as a reason not to abuse alcohol. Today, Gascoigne addressed the controversy on Twitter, jokingly asking ‘what’s he snooping about for?’ 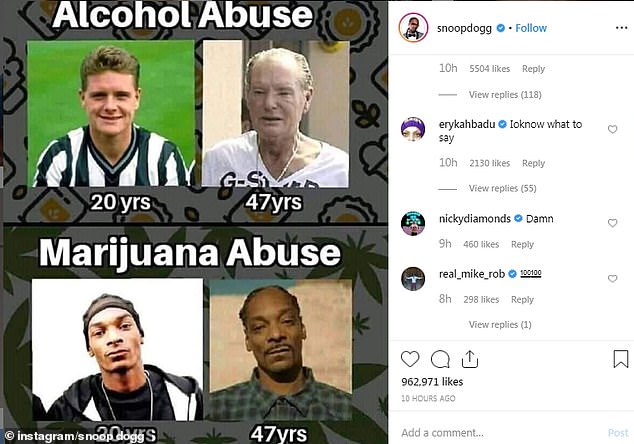 Outrage: In the same post, a set of pictures entitled ‘Marijuana abuse’, the Sweat hitmaker shared a snap of himself aged 20, alongside one of him today at 47, looking like he had barely aged

In the same post, a set of pictures entitled ‘marijuana abuse’, the Sweat hitmaker shared a snap of himself aged 20, alongside one of him today at 47, looking like he had barely aged.

It is not known if Snoop Dogg is aware who Paul Gascoigne is or of the former midfielder’s well-documented battles with alcohol addiction, drugs and mental health.

The post invoked the ire of fans who branded the star a ‘bully’ and ‘disrespectful’ and lambasted him for using the photo in light of Gazza’s medical issues. 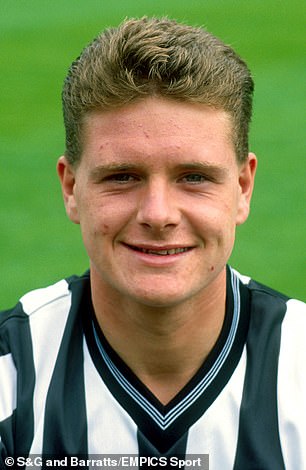 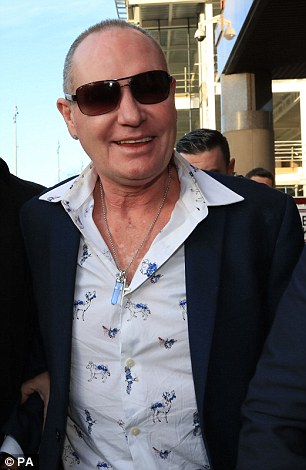 The US star, 47, was branded a ‘disgrace’ when he posted a photo of the former England footballer in his younger playing days (left) alongside an image of him after a drinking binge. Pictured right: Gascoigne  in January this year

MailOnline has contacted representatives for Snoop Dogg and Paul Gascoigne for comment.

Broadcaster Piers Morgan posted an image of the tweet and wrote: ‘This is nasty. Shame on you Snoop.’ 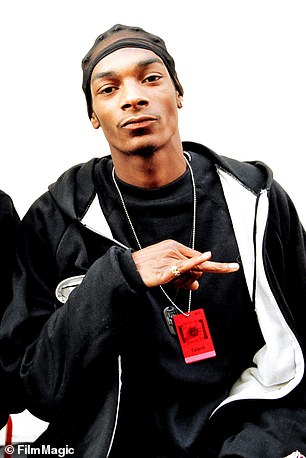 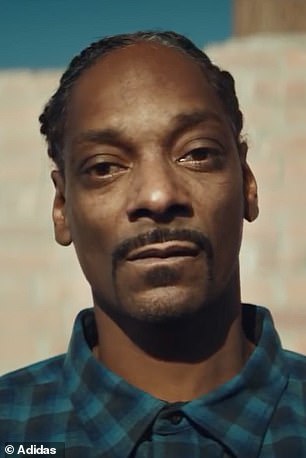 In the same post, a set of pictures entitled ‘marijuana abuse’, the Sweat hitmaker shared a snap of himself aged 20, alongside one of him today at 47, looking like he had barely aged

Another tweeted: ‘Wow I can’t believe what #SnoopDogg tweeted about Paul Gascoigne when he has an illness and Snoop chooses to be a stoner and not for medical reasons.’

One added: ‘No-one disrespects Gazza and gets away with it’ while another wrote: ‘Snoop Dogg is cancelled after going after Gazza like that.’

Gazza took to Twitter on Thursday in response to the cruel photo, sharing an inspirational quote about the importance of mutual respect and good manners – which featured a cartoon of Snoopy in an apparent swipe at the rapper. 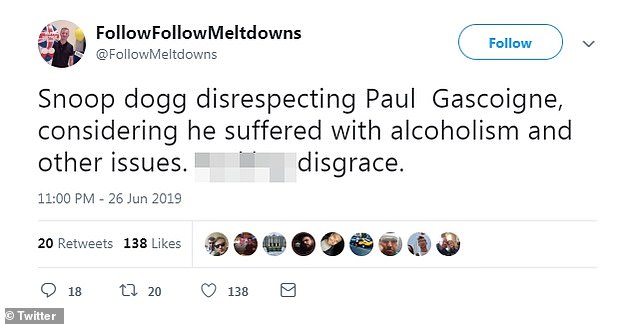 Fury: The post invoked the ire of fans who branded the star a ‘bully’ and ‘disrespectful’ and lambasted him for using the photo in light of Paul’s medical issues.

‘Do not allow the actions of others to decrease your good manners, because you represent yourself, not others.’

He captioned the post with three hearts with his response lauded as ‘brilliant’ by Piers.

The former footballer has had several stints in rehab for drugs and alcohol addiction – the latter of which he has suffered from for more than 20 years.

In 2011 the sporting legend revealed he used to down nine brandies and snort cocaine before a match.

Earlier this week Gascoigne caused controversy when he led a chorus of boozy Benidorm holidaymakers in belting out ‘f*** the Pope and the IRA’ during his £18-a-ticket singalong bash.

Fans flocked to see the star perform at the Ibrox Bar in the Costa Blanca Spanish resort on Saturday where he was filmed joining in the foul-mouthed chant.

Gascoigne, who played for historically Protestant-supporting club Rangers, sang an adaptation of Tina Turner’s Simply The Best which hit out the the leader of the Catholic Church and the predominantly Catholic Irish nationalists. 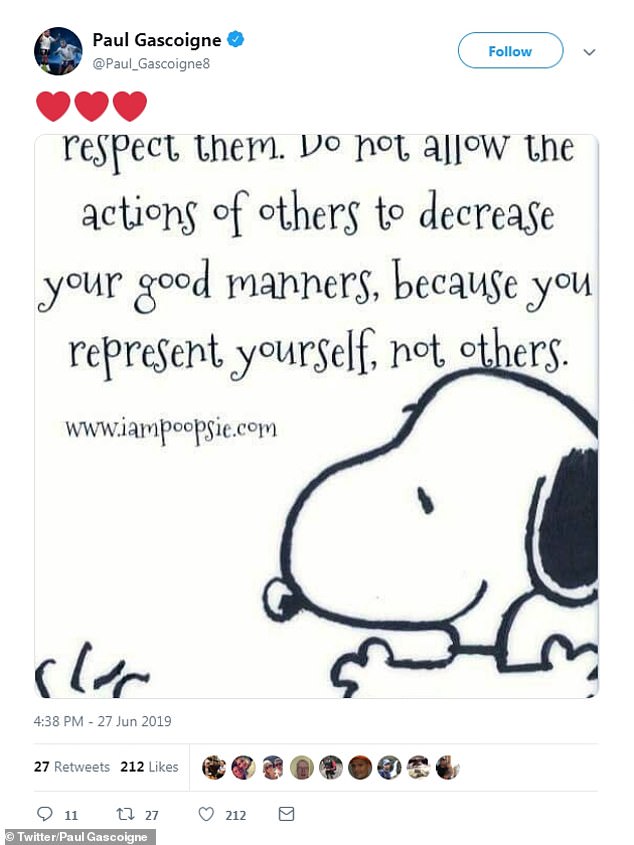 Dignified: Gazza took to Twitter on Thursday in response to the cruel photo, sharing an inspirational quote about the importance of mutual respect and good manners

A video published by the bar on their social media shows the retired footballer, dressed in a bright blue shirt, make his way through a crowd of merry and shirtless fans.

At the start of June 2019, the PFA and the Sporting Chance Clinic reached out to Gascoigne after footage emerged showing the former England star apparently drunk and asking a man for cocaine.

Gascoigne was caught on camera seemingly offering money for the Class A drug.

The star later attempted to allay fears, later tweeting that he was ‘well and safe’.

Alongside a picture of himself kissing the England shirt in his pomp, Gascoigne wrote: ‘I love you all from the bottom of my heart.’ 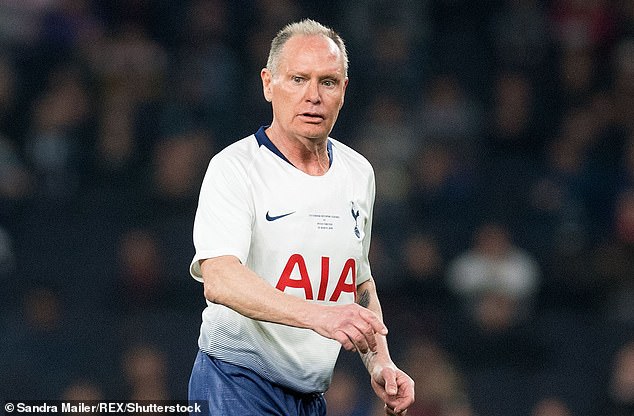 Return: The star returned to the pitch at Tottenham Hotspur in March for the Legends v Inter Forever match earlier this year 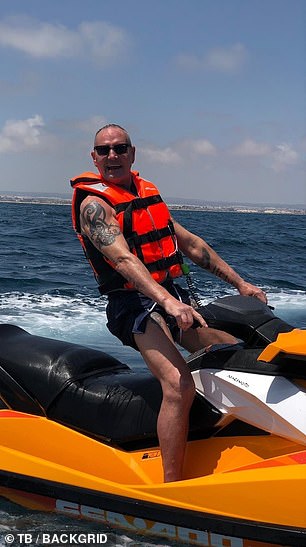 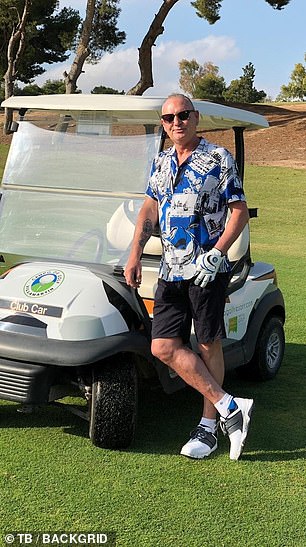 The most recent photos of the former England midfielder were taken this week and show him relaxing in Spain, enjoying a ride on a jetski and a round of golf 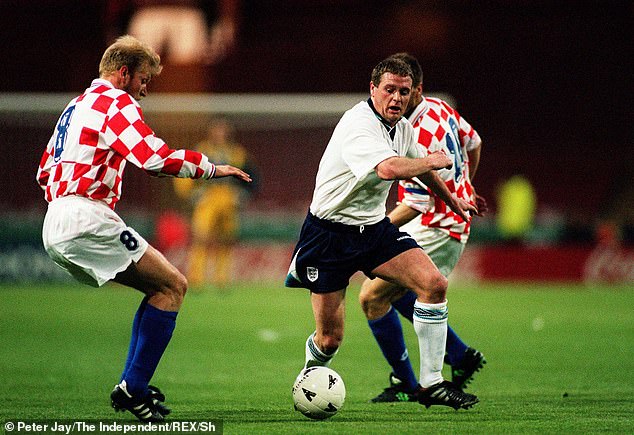 Heyday: Gazza is known as one of the greatest footballers the country has ever produced (pictured 1991)

Snoop has long been a proponent of marijuana smoking, which is legal in the state of California, and once boasted of lighting up in the White House.

Gascoigne played for Lazio and won 57 England caps during an eventful career but went back in rehab after ending up in hospital following a two-day binge.

He started his football career at his boyhood club Newcastle when he joined the youth set-up aged just 13. He went on to join the first team in 1985.

He scored 21 goals in 92 appearances for the Magpies, then joined Tottenham in 1988 for a then-record British fee of £2.2million and played 92 times for the club.

Snoop has released 16 studio albums since being discovered by Dr. Dre in 1992 and has sold over 23 million records in the United States and 35 million worldwide.

He has also appeared in numerous films and television episodes, including Baby Boy, Scary Movie 5 and Starsky & Hutch.

What are the risks of Cannabis use?

Cannabis is the most widely used illegal drug in the UK.

Short term use can make people fell confused, anxious or paranoid, and some experience panic attacks and hallucinations.

The NHS states that regular users can feel demotivated and uninterested in things going on in your life Long-term use can affect your ability to learn and concentrate.

Research shows that 10 per cent of regular cannabis users become dependent on it.

Smoking cannabis with tobacco, means users are likely to get addicted to nicotine and risk getting tobacco-related diseases such as cancer and coronary heart disease.

Regular cannabis use increases your risk of developing a psychotic illness, such as schizophrenia.

People who smoke cannabis regularly are more likely to have bronchitis (where the lining of your lungs gets irritated and inflamed).

Like tobacco smoke, cannabis smoke contains cancer-causing chemicals, but it’s not clear whether this raises your risk of cancer.

Cannabis may affect fetility and also increases the risk of cardiovascular disease and stroke.

What are the risks of alcohol misuse?

Alcohol misuse is when you drink in a way that’s harmful, or when you’re dependent on alcohol.

To keep health risks from alcohol to a low level, both men and women are advised not to regularly drink more than 14 units a week.

The short-term risks of alcohol misuse include: accidents and injuries requiring hospital treatment, such as a head injury; violent behaviour and being a victim of violence; unprotected sex that could potentially lead to unplanned pregnancy or sexually transmitted infections (STIs); loss of personal possessions, alcohol poisoning – this may lead to vomiting, fits (seizures) and falling unconscious.

People who binge drink heavily over a short period of time are more likely to behave recklessly and are at greater risk of being in an accident.

A dependent drinker usually experiences physical and psychological withdrawal symptoms if they suddenly cut down or stop drinking, including: hand tremors – ‘the shakes’ sweating, seeing things that are not real (visual hallucinations) depression and anxiety.