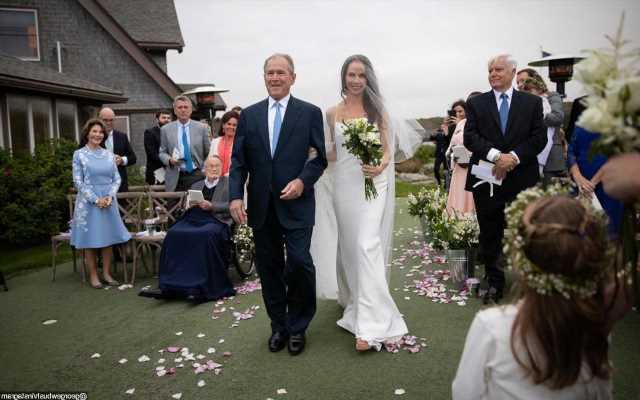 According to a statement published on the Bush family’s official social media page, Barbara Bush welcomes her baby daughter Cora Georgia Coyne with her husband Craig Coyne in Maine.

Announcing the exciting news was the Bush family via Twitter. On Tuesday, September 28, the former president revealed that his 39-year-old daughter gave birth to a baby girl in Maine, near the place where the first-time mom tied the knot with Craig.

“With full hearts, Laura and I are delighted to announce the birth of our new granddaughter,” the statement began. “Barbara gave birth to Cora Georgia Coyne on September 27, 2021, in Maine not far from our family home where Barbara and Craig were married.”

In a separate tweet, the announcement continued to gush over the family’s new addition. “Cora is healthy and adorable, and we are proud and grateful,” so read the statement from the former president. 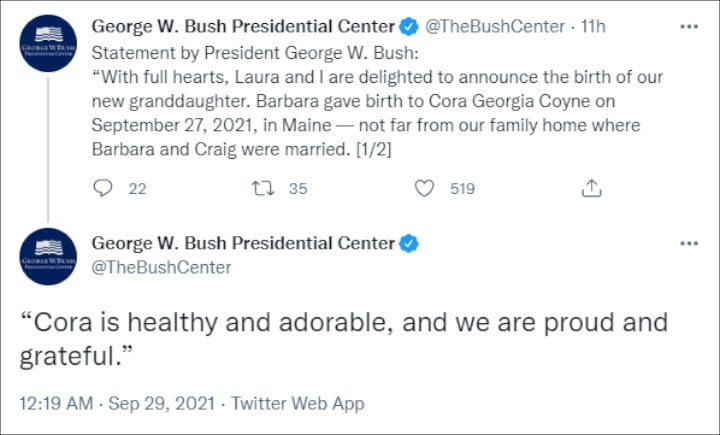 The Bush family announced the arrival of Barbara’s newborn daughter.

Upon learning the exciting news, Jenna took to her Instagram page to congratulate her twin sister on welcoming her first baby. “Dearest Cora Georgia, Today is the day I got to meet my most beautiful, precious, feisty, niece (a bit earlier than we expected!)” wrote the “Today with Hoda & Jenna” co-host.

“I witnessed in awe as my dearest, toughest @barbara.p.bush became a mama,” Jenna continued alongside a series of photos from the hospital. “And today is the day I fell in love! Some cousins are anxiously waiting to play with you, but not just yet love. Xx auntie j.”

Barbara and her screenwriter husband, Craig, exchanged their vows in October 2018 in an intimate ceremony outside in Kennebunkport, Maine, at the family’s Walker Point compound. “Barbara is named for a unique and strong woman — and rightly so, because she is unique and strong,” George captioned an Instagram photo from the wedding at the time. “[Laura] and I are so proud of our compassionate, daring, fierce, kind, intelligent, loving daughter. And we’re thrilled to welcome Craig Coyne to our family.”