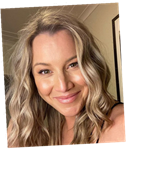 Hannah Ferrier has expanded her crew.

In the most precious and adorable way possible.

On Monday, November 2, the recently-ousted Below Deck Mediterranean star jumped on Instagram and revealed that she had given birth to a daughter, Ava Grace Roberts, at the end of October.

The newborn is Hannah and partner Josh’s first child together.

“Madam has arrived! Josh and I are so happy to welcome to the world our little girl – Ava Grace Roberts,” Ferrier confirmed today.

“Born on the 26th of October. She is already a little menace that has captured our hearts forever.”

Ferrier revealed she was expecting in June, telling followers that she was five months along at the time.

“You are already my favourite adventure,” she captioned her a snapshot on Instagram, which featured her smiling while cradling her growing baby bump.

“He’s over the moon,” the then-mother-to-be told The Daily Dish this summer. “He’s so excited.”

Last week, the reality TV star wrote a mini tribute to her child’s father, and the long-term love of her life.

“2 year anniversary with my gorgeous man,” she said online. “Words can’t express how much I am looking forward to this next chapter.”

And now that chapter has begun!

The pregnancy announcement, meanwhile, came just several days after Ferrier was given the boot from Below Deck Mediterranean Season 5.

She found herself in the middle of a scandal in August after bosun Malia White reported the veteran chief stewardess for having unregistered Valium and a vape pen in her possession on the vessel.

Captain Sandy Yawn then fired Ferrier from The Wellington crew on a controversiial episode of the Bravo program.

For her part, Hannah admitted she could have been more open about the pills.

But also insisted she wasn’t doing anything wrong and certainly doesn’t have a substance abuse problem.

“It’s anti-anxiety medication. It’s like, it’s five milligrams of Valium! It was just disappointing,” she said after the episode aired.

On Twitter, Ferrier emphasized that the Valium was “prescribed” and the CBD product is “legal in Spain.”

“If I could do it all over again, I would’ve just declared them as soon as I came on board,” the Below Deck Med OG told E! News in August.

“It was definitely not something that was intentional. I wasn’t trying to hide anything.”

Now, at least, Ferrier has something to focus on aside from her professional takedown.

“OMG CONGRATS!!!! I can’t wait to come visit and have our babies be friends!!!!” wrote Vanderpump Rules’ Scheana Shay in response to the baby news.

Allow us to now do the same: