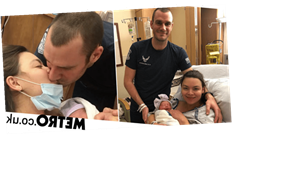 Cooper – the son of the late Playboy mogul Hugh – announced that his wife had given birth to their first child at 5.23pm on August 24, sharing sweet pictures to Instagram.

The 28-year-old wrote: ‘At 5:23pm this afternoon Scarlett and I welcomed our daughter Betsy Rose Hefner into the world. We are overwhelmed with gratitude, love and joy.’

Hefner shared a picture with his arm around Scarlett, 29, who was lying in her hospital bed cradling little Betsy – who wore a large bow on her head and already seemed to be smiling.

He also shared a video of himself sharing a kiss with his wife, who had a face mask around her chin, before posting a close-up of their little girl swaddled in a blanket.

Hugh Hefner’s ex Kendra Wilkinson was among the first to congratulate the couple, commenting: ‘Congrats to you all. She’s beautiful. welcome to the world Betsy!!’

At 5:23pm this afternoon Scarlett and I welcomed our daughter Betsy Rose Hefner into the world. We are overwhelmed with gratitude, love and joy.

Betsy is the first Hefner grandchild, as Hugh’s eldest children Christie, 67, and David, 64, from his marriage to Millie Williams, are not believed to have had children.

His 30-year-old son Marston, Cooper’s brother from his marriage to Kimberley Conrad, is also yet to have kids.

Scarlett, who now goes by her married name, tied the knot with Cooper in a simple ceremony at the Ventura Courthouse in California in November 2019, after six years together.

Cooper proposed in 2015 after two years of dating, saying he was ‘lucky to have fallen in love with my best friend’.

They confirmed they were expecting their first baby back in March, with Cooper writing on Instagram: ‘Scarlett and I have been blessed with wonderful news we are ecstatic to share. This summer we will be welcoming a new member to the family. The two of us could not be happier as we wait for the arrival of our little one.’

And Scarlett, who played Pansy Parkinson in the Harry Potter franchise, held a virtual baby shower over Zoom in July, which was attended by her castmates Evanna Lynch (Luna Lovegood) and Afshan Arad (Padma Patil).

In the early months of Scarlett’s pregnancy, Cooper – who was previously chief creative officer and chief of global partnerships for Playboy Enterprises – was completing his Air Force Basic Miltary Training.

Now, he has turned his attention to running for the California State Senate.

Cooper told The Hollywood Reporter: ‘For as long as I can remember I have had a deep interest in how our government institutions work, have been fascinated with discussing and defining morality, and have always been interested in people and relationships. If those are your interests, a road you might find yourself driving toward is public service.

‘I believe I’ve been passionate for much of my life about serving the public; however, it took me a great deal of time to figure out how I would go about doing that.’

Meanwhile, Scarlett has kept acting since her Harry Potter days, starring as Nora in The Vampire Diaries and most recently appearing in Runaways as Bronwyn.