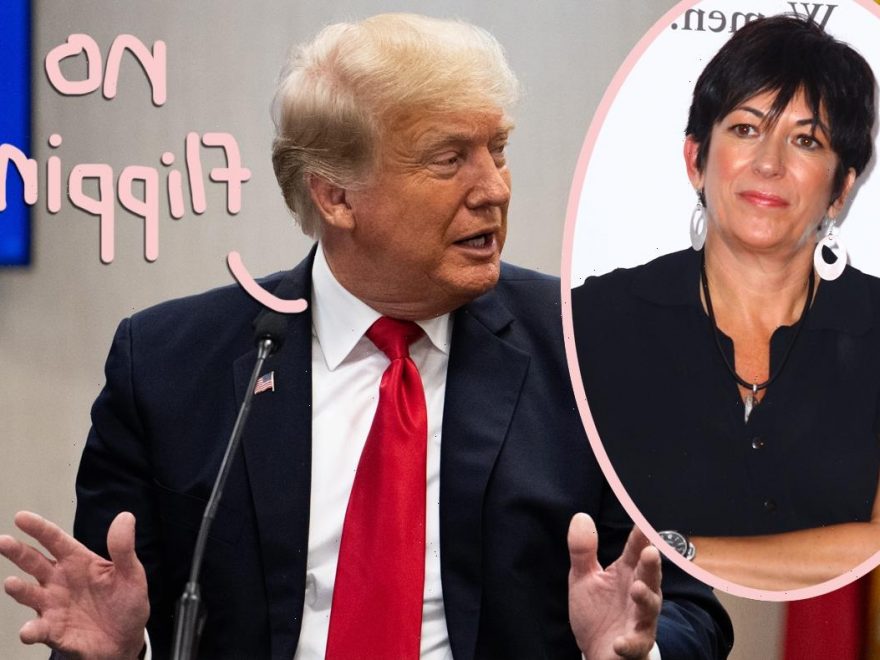 Ever since the Jeffrey Epstein sex trafficking charges were filed, we’ve been waiting for the other shoe to drop. Well, shoes plural as the billionaire pedophile knew a LOT of very famous and powerful men. And you don’t traffic that many underage girls to just yourself…

Of course, the death of Epstein while in custody seemed to put a lid on anything he could have told prosecutors to get himself a lighter sentence — you know, the main reason most people can’t believe it was really suicide.

But then last summer his right-hand woman and longtime friend Ghislaine Maxwell was arrested. The socialite was accused of aiding him in his trafficking schemes, procuring young women for him and even partaking in the sexual activity.

Suddenly the questions arose again — what would we learn? Would she plead guilty and cooperate with the feds? If so, who would she implicate??

According to a new book, one of the people most interested in those questions was former president Donald Trump. As you may recall, Trump was also a good friend of Epstein for many years. He infamously told New York magazine for a profile on the billionaire:

“I’ve known Jeff for 15 years. Terrific guy. He’s a lot of fun to be with. It is even said that he likes beautiful women as much as I do, and many of them are on the younger side. No doubt about it — Jeffrey enjoys his social life.”

“Many of them are on the younger side.” This quote may have been icky for the ten people who read it in 2002, but after Epstein’s first accusation of underage sex trafficking just three years later it looked way, way worse.

That investigation ultimately got reduced to a couple charge of solicitation of prostitution with a 14-year-old, thanks to a “sweetheart deal” negotiated by Trump lawyer Alan Dershowitz and signed off on by Trump’s future Secretary of Labor Alexander Acosta. So it’s no wonder a reporter asked the POTUS about the case after Maxwell’s arrest last year. His answer?

Anyway, that whole not-following-it-too-much thing didn’t last, according to Landslide: The Final Days of the Trump Presidency. In the upcoming book, journalist Michael Wolff claims despite his feigned lack of interest, Trump “had tried hard to downplay his own long relationship with Epstein” since the case broke. But he took a “sudden interest” in the case after it became clear his time in the White House was coming to an end — and the issue of outgoing pardons was raised.

In an excerpt published by The Times, Wolff writes:

“‘Has she said anything about me?’ openly wondered. ‘Is she going to talk? Will she roll on anybody?’”

What information does he think she had on him?? There is of course, the woman who came forward in 2016 saying Trump raped her when she was just 13 years old at Epstein’s NYC apartment — though that story hit a dead end when the woman’s own lawyer dismissed the case, reportedly because the accuser felt unsafe after death threats.

But who knows what else the men close to Epstein got up to? Well, Ghislaine Maxwell, for one.

Wolff suggests Trump considered pardoning her, however briefly, then switched from thinking about pardoning her to protect himself to cutting out the middle man and just pardoning himself:

“But pardon talk almost immediately segued to the question of if he should pardon himself: ‘They say I can. Unlimited pardon power.’”

Now, it’s important to remember Michael Wolff is the man behind the 2018 bestseller Fire And Fury. While the incendiary book was widely read, it was also not taken as seriously as others on the former president due to its author’s alleged penchant for salacious gossip over vetted testimony. But we do know he really did have unprecedented access at the White House, inexplicably.

So you’ll have to decide for yourself how much weight you give Wolff’s words. What do YOU think? Does this have the ring of truth? Is there something from Trump’s days with Epstein that he doesn’t want anyone to know??