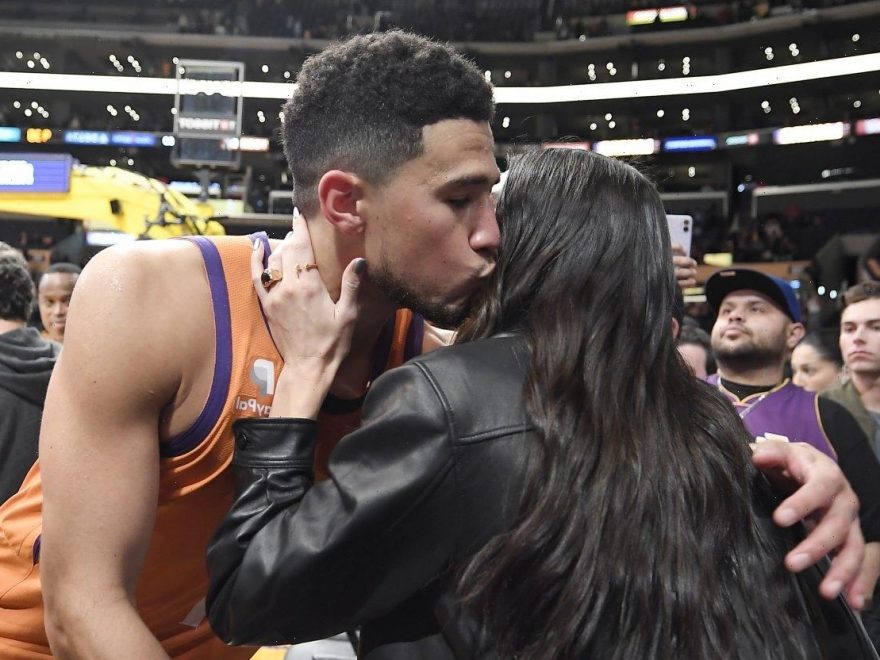 Now that Kendall Jenner‘s beau, Devin Booker, and the Phoenix Suns team he plays for have been eliminated from the NBA playoffs, there’s chatter that it’s all because of that old “Kardashian-Jenner curse.”

This continues to come up year after year every time a professional athlete who’s dating, previously dated, or married one of the Kar-Jenner sisters loses a big game or has a downturn in their career. So we thought we’d take closer a look at the “curse” to determine if it’s total nonsense or if there’s actually something to it and what it does to its so-called “victims.”

What is the Kardashian-Jenner curse?

The term is used to describe the bad luck or hard times that many men who get close to the siblings end up experiencing. Because the curse is oftentimes pointed to as a reason the sports stars they’ve been with struggle, we’re dissecting what has happened to those athletes specifically who are or were partners with one of the Kar-Jenner siblings.

Is the curse real and what happened to its ‘victims’?

Before she married Kanye West, Kim Kardashian married former NBA player Kris Humphries. But after their divorce, Humphries was no longer known for what he did on the court. Instead, he was recognized as the villain who was married to the reality star for just 72 days. Humpries stated in an essay for The Players’ Tribune that really hurt him because “all I’ve ever wanted to be known for was basketball.”

Kim’s younger sister, Khloé Kardashian, has been in relationships with a few NBA stars. Most fans can’t forget her roller coaster of a relationship when she dated Tristan Thompson. The former Cleveland Cavaliers player was caught cheating on Khloé hours before she gave birth to their daughter. But it wasn’t just one cheating scandal Thompson was involved in many while he was with Khloé. Still, whenever the Cavs performed poorly, it was Khloé who got the blame. Moreover, Thompson never won another chip during the time they were together.

Back in 2009, before Thompson, the Good American founder married Lamar Odom after only knowing him for a month. But once their wedded bliss wore off, Odom and Khloé’s marriage started to deteriorate and so did his playing career. Khloé shouldn’t be blamed for the former Lakers forward’s infidelity or personal struggles but some on the internet have made that connection.

It needs to be noted though that Odom did win an NBA championship while he was with the Body Revenge host. And as for Kendall, who is now dating Booker, while it’s true that he hasn’t held the Larry O’Brien trophy yet, he did win a gold medal for the U.S. at the Tokyo Olympics in 2021. And circling back to Kim’s relationships, she was Reggie Bush’s girlfriend when he won a Super Bowl with the New Orleans Saints. So much for a curse, huh? To think it’s actually real seems a bit ridiculous and the famous family feels the same way.

The Kar-Jenner sisters are well-aware of the theories and rumors about this supposed “family curse” and have voiced their opinions on all the chatter. On a Keeping Up With the Kardashians reunion special, the ladies slammed those who really believe the issues others have faced has anything to do with them.

“What I don’t like about this narrative is that the blame is on us,” Kendall said. “The men need to take that responsibility. I think that we’re all extremely giving and caring and loving women. When there is a man in our lives we give everything to them and, as a family, we all love them so much. It’s almost offensive.”

Her big sis, Khloé Kardashian, agreed that the women certainly shouldn’t be blamed for “men’s problems.”

Kylie also spoke about the curse during an interview with GQ, when she was asked if the men who enter the family just can’t handle the level of fame the sisters have. “But it’s not just men,” Kylie insisted. “It’s friends, it’s people who come and just don’t know how to handle it. It’s the negative. There’s a lot of people who love us, but there’s also a huge handful of people who don’t like us.”