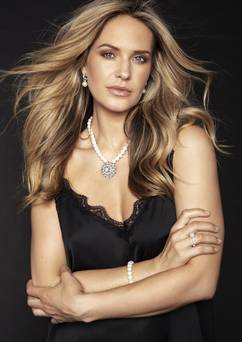 ‘Second time around, the comments are less,” says Aoibhín Garrihy with a laugh. “Maybe people think, ‘The first child’s still alive, she must be doing something right, we’ll leave her off’.”

Hanorah, “the first child”, turned one at the end of June, and Aoibhín is expecting her second child with her husband, John Burke, in December.

It’s a different experience second time around, the former Fair City actress concedes. She laughs about monitoring every change and movement when she was pregnant with Hanorah and how, somehow, this pregnancy is flying by almost without her noticing. She and John are delighted, she says, and love the idea of two children so close in age.

“When you’re in it, you might as well stay in it,” she says. What Aoibhín has noticed, however, is that it’s not just that she’s calmer, but the social-media comments and interference is also more low-key. When she was about seven months’ pregnant with Hanorah, Aoibhín was criticised online for climbing Carrauntoohil with her husband. She didn’t take the criticism lying down, and had a good pop back, slamming the mum-shaming and concluding with the hashtag #pregnantnotpowerless.

This time around, Aoibhín’s not so sure she’d be so sensitive, though she doesn’t use that exact word.

“The mum-shaming surprised me the first time,” says Aoibhin. “I never witnessed people being so forthcoming before, and saying whatever they wanted about people they didn’t even know. We’re far better these days about commenting on people’s bodies and their weight and their appearance, but parenthood is still the one domain where people think they can say what they like. It’s sort of open season and everyone has an opinion.

“But I came to realise that there’s a positive community out there, too, who have so much support and advice to offer,” she says. “You have to take both with a pinch of salt, and if you were to take everything that everyone says to heart, you’d be in an early grave. My mom is my encyclopedia, but really, you learn quickly that you trust your gut with your baby. That mother’s instinct kicks in so fast.”

The decision to have a second baby so soon after baby Hanorah came easily to Aoibhín and John, she says. They are both from very close families, and it really has been a case of a village helping to raise the baby.

“It’s been great with Hanorah,” Aoibhín says. “We [three Garrihy sisters] were all very close in age and grew up very close, and if John and I can copy that model, we’ll be lucky.”

Aoibhín is very close to her parents, Eugene and Clare, and to her two sisters, Ailbhe and Doireann. They are all based in Dublin, but up and down to Clare regularly. John’s family is close by and very involved.

Life will be busier with two children under 18 months, she admits, and Hanorah might get an awful fright with a baby to compete with, but Aoibhín notes how this second pregnancy is flying by, and, this time, she’s already past the halfway mark in the blink of an eye.

Aoibhín notes that she did the shoot for Knight & Day Jewellery – which features on these pages – during this pregnancy. It’s a long-standing association with the brand, which began shortly after Dancing With The Stars.

“I started with them in my glory time, when I was in the shape of my life,” she says, amused. “I never will be in that shape again, so I was only delighted to do a glamorous shoot. Then for the next season, I was pregnant, and then postpartum for the next. And 22 weeks’ pregnant this time. They’ve been so open every time. It’s so rare you’d find a brand that would embrace womanhood in all its forms.” The last time I spoke to Aoibhín, she was heading into the finals of the 2017 run of Dancing With The Stars. The first time I interviewed her was nearly a decade ago, when she was starting out on Fair City.

She has passed through many milestones over that 10 years. She left Fair City after three years; starred in the Jamie Dornan series The Fall; and came second in DWTS.

She married her long-term partner, John Burke – who runs his family hotel, the Armada, in Doolin, Co Clare – in 2016, and made the decision to leave her native Dublin and move down there permanently.

Aoibhín’s parents are from Co Clare, and her family are part of the business community there, so the county was her second home, but making it her primary home was a big move.

“I’m still in Dublin two, sometimes three, days a week, depending on work,” says Aoibhin. “Clare is home now, though, and it’s been an amazing place to start a family. I had Hanorah during the heatwave last year, and after she arrived, we were up and out, and it was so warm, and to have the sea and nature on our doorstep, had a really positive effect on my mental health. When I am leaving Dublin and I get on the Naas Road, I feel this certain calm come over me.”

Aoibhín doesn’t miss the city, possibly because she still gets to dip in and out of it, but also because she feels there is as much, if not more, opportunity to live a creative life in her adopted county.

“I see so much stuff happening in the west,” she says. “In the city, everyone is on their own track, but here I see people coming together and collaborating, and someone who is specialising in one thing joining up with someone else and making something special. In Clare, we had Trump a while back, and the Irish Open. I was up in Galway for the Arts Festival last month. It’s an exciting place to be.”

Aoibhín absolutely hasn’t entirely retired from acting, but she has definitely taken herself mentally out of that world.

“I’d never say never,” she says with a laugh. “And I got a call last week about a show after Christmas that had a role for me, but that’s only a few weeks after the baby is due, so we’ll see.”

She’s not looking for acting work, that is what Aoibhín will say with certainty. And her head feels better for it. “I had to be honest with myself,” she continues. “It was taking a toll on my mental health, and I had to be honest and choose happiness. And the minute I made that decision, it felt like a weight off. I was taking ownership of my career. And now I’ve taken on this brand, Beo, and it has given me so much joy and pride.

Beo, she says, has hosted wellness events for 13,000 women in the last two years, offering a chance to take some time for self-care in the busy world, covering nutrition, mental health, exercise, and style. Aoibhín hosts a talk with some inspirational guests. Her mother, Clare, is involved, and so is her sister, Doireann, now co-host, with Eoghan McDermott, of 2FM’s breakfast show.

“Doireann brings the humour and lightness to things that can become quite heavy at times,” Aoibhin says. “She’s very witty and a real extrovert. We’re all very different.”

Their other sister, Ailbhe, is in PR, and Doireann, like Aoibhín, gave acting a real go. She too, Aoibhín says, hated the constant grind of being told you weren’t good enough. Aoibhin really admires how Doireann self-started her current career through her podcast, and on her own terms.

Acting is a lot about luck, says Aoibhín, but she thinks it also takes a very specific kind of person to hack it. As a drama teacher for many years, people often asked Aoibhín if she thought they had what it takes, or if they should keep at it.

There is the sense from Aoibhín that she is living a far fuller life, having phased out what was once very important to her. Certainly, she does not seem to feel that there is now something missing. Quite the opposite, in fact.

If she had the acting ambition again, however, Aoibhin would go for it. And she knows that John would support that. You can’t hold back the people you love from what they love, she believes. That’s where resentment grows.

When I last met Aoibhín, while her focus was very much on the DWTS finale, her mind was also on John’s expedition to the summit of Everest. He was due to set off almost immediately after DWTS ended, and Aoibhín was going with him as far as Base Camp. A world away from sequins and glitter balls, and, she says, the most difficult goodbye of her life, as she left John to attempt his ultimately successful ascent.

“I felt so lucky to be able to go to Base Camp with them,” Aoibhín says. She got to know the Sherpas and, before she left, she insisted on their assurances that they would mind him, and make sure he ate and had enough oxygen, and didn’t take any risks.

“That was reassuring,” she says. “But it was probably only for my own peace of mind.”

“This year has been such a year for bad news,” she continues. “Having met Seamus [Lawless, who fell to his death on Everest in May], to say the man was prepared was an understatement. I met him at the Nepal Ireland conference about four years ago, and he was planning Everest 2019 back then. He was ambitious, but he was organised and had done everything to prepare.”

The fact that things can go wrong in those circumstances, no matter how experienced or organised the mountaineer, is the thing that’s hardest to deal with for those at home.

“[Seamus’s death] really affected John. He’d been out on days in the hills with Seamus. It’s a small mountaineering community in Ireland, and they all support and know each other. There are no words,” Aoibhín says.

Now, with a little girl and another baby on the way, would Aoibhín let John climb Everest, or anything like it, again?

“I have my views on it,” she says good humouredly and not quite sharing them. “But you can’t hold out the tide. I would worry that John would resent me from stopping him doing something. And in the same way, he’d never stop me from doing what I dreamt of.

“But within reason,” she exclaims. “Everest is done. And I think the crazy ones, like K2, maybe they’ll keep for when the kids are reared.” She pauses. “But he’s going to Mont Blanc in a few weeks’ time.”

Aoibhín Garrihy seems OK with that.

Water off a duck’s back.