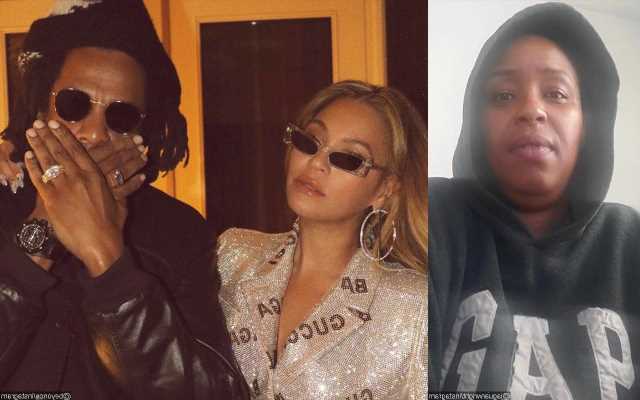 The RnB singer is reportedly taken into custody following a physical altercation with her husband which she films for her Instagram Live, during which she allegedly throws her son’s ashes.

AceShowbiz –Jaguar Wright got into trouble with the law, just days after making serious accusations against Jay-Z. The R&B and neo soul singer has been arrested after an apparent domestic dispute with her own husband.

In a video which has circulated online since Saturday, January 14, someone, who is believed to be Jaguar, is seen being taken onto a stretcher while being surrounded by cops. She’s heard screaming while her husband, who shot the video, claimed that she assaulted him while he was at the barbershop.

It’s not clear what prompted the altercation in the first place, but Jaguar’s husband denied her allegations that he pulled a gun. “She did this to herself,” he said of her arrest. Claiming that he still loves her anyway, he added, “Y’all pray for her. Please pray for her! Pray for us!”

Meanwhile, a video filmed by Jaguar herself captured the altercation that seemingly led to her arrest. In the footage which she first shared on her Instagram Live, she was heard lashing out at someone while she’s getting beaten up.

Some people appeared to try to separate Jaguar from her husband as she yelled, “You f**king dead. I’m blowing this s**t up!” According to social media users, she threw an urn containing her deceased man’s ashes on a man during the fight.

Jaguar’s arrest comes just several days after she made shocking allegations against Jay-Z and Beyonce Knowles. She claimed that the hip-hop mogul was involved in the killing of Big L, a popular New York rapper who was Jay-Z’s chief rival in music. She also claimed that Big L’s death was some sort of “Illuminati sacrifice,” which she said Jay-Z, Beyonce and her mother were involved in.

Jaguar is no stranger to making bizarre comments though. Back in 2020, she accused rapper/actor Common of sexually assaulting her, which he later denied. “God bless, Jaguar,” he responded at the time. “I really don’t have any negative thoughts towards her. I was for surely disappointed and hurt when she said what she said about me because it wasn’t true. I know people that have experienced sexual assault and that’s not anything to just say if it’s not true.”

“But I also understand that she may be going through some things that I don’t understand,” the continued. “In all truth, I went through different emotions. I’m like, oh man, why is she saying this? This is not true. How’s this gon’ affect me?”