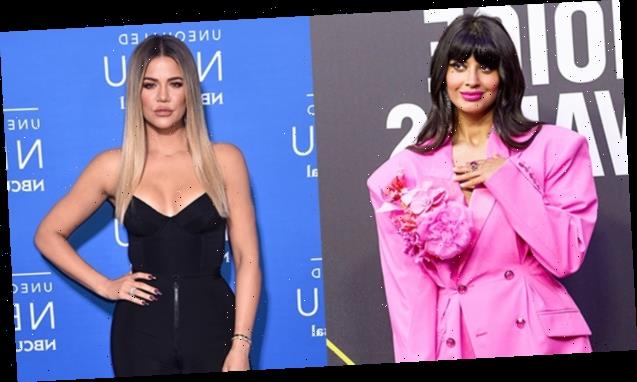 Jameela Jamil used her platform to weigh in on Khloe Kardashian‘s reaction to her untouched photo being leaked online. The Good Place alum and activist, 35, took to Twitter on April 7, quote-retweeting the Keeping Up With The Kardashians star’s, 36, social media post about her leaked photo that circulated following the Kar-Jenner’s Easter getaway in Palm Springs. “This is what I was saying. She was bullied into this mind state,” Jameela began her tweet, referencing Khloe.

“But now is also a really good time to admit to surgeries, thinning photographs and videos, and to stop being part of the culture that makes girls like her hate herself. No more diet products. No more ‘revenge body,’” she went on. “When diet culture wins, *everyone* else loses. Even the people making money from promoting it,” her statement ended.

Jameela has been an ardent critic of the unattainable beauty standards that have festered for years. While she has criticized some the decisions the Kardashian women have made in the past, she’s been clear that it’s about the result of a culture that has put pressure on women to look a certain way. But her latest statement comes following Khloe’s response to her leaked, untouched photo, which featured the star in a leopard bikini.

“This is me and my body unretouched and unfiltered. The photo that was posted this week was beautiful,” the mother-of-one began her statement. “When someone takes a photo of you that isn’t flattering in bad lighting or doesn’t capture your body the way it is after working so hard to get it to this point … you should have every right to ask for it to not be shared – regardless of who you are,” she continued. The Kardashian PR team was busy over the course of the last few days, trying to have the picture removed, which caused social media users who recirculated the image to be locked out of their accounts.

“I am not perfect but I promise you that I try every day to live my life as honestly as possible with empathy and kindness. It doesn’t mean I have not made mistakes…it’s almost unbearable trying to live up to the impossible standards that the public have all set for me,” she wrote. “You never get used to being judged and pulled apart.

“My body, my image and how I choose to look and what I want to share is my choice,” Khloe continued. “It’s not for anyone to decide or judge what is acceptable or not anymore…for those else [SIC] who feel the constant pressure of not ever feeling perfect enough, I want you to now I see you and I understand.”