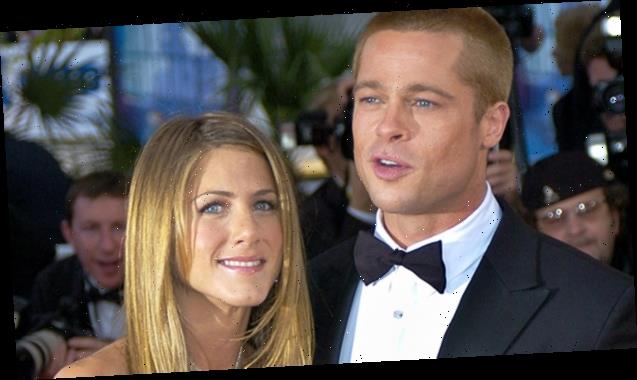 Jennifer Aniston and Brad Pitt just had a VERY flirty reunion for the table read of ‘Fast Times at Ridgemont High.’ Fans lost it as Brad’s character was supposed to be ‘jacking off’ at the thought of Jennifer’s character!

Ex-spouses Jennifer Aniston, 51, and Brad Pitt, 56, finally reunited for their virtual reading of Fast Times At Ridgemont High — which led to one very awkward scene. Brad’s character (also named Brad) is supposed to be “jacking off” — as narrator Morgan Freeman dramatically puts it — to the character Jennifer is reading for, Linda Barrett. As Mr. Freeman describes this fantasy, no one can keep a straight face during the reading that was livestreamed on Sept. 17.

“Her breasts seem even bigger than usual. Her nipples are hard,” Mr. Freeman reads in his serious tone, leading stars like Matthew McConaughey, Julia Roberts, Jimmy Kimmel and Sean Penn (who also participated in the table read) to crack a smile. Then, it was Jennifer’s cue to read her line amid this vivid fantasy: “Hi Brad. You know how cute I always thought you were. I think you’re so sexy. Will you come to me?” Yes, Jen just read those lines to her ex-husband whom she split from in 2005, who couldn’t help but smile sheepishly.

This is not the first time that Brad and Jen have reunited in 2020, though! Their last reunion actually took place in person during the SAG Awards in January. It was a huge night for both stars, as Brad took home the award for Outstanding Performance by a Male Actor in a Supporting Role in a Motion Picture (Once Upon A Time In Hollywood), while Jen won Outstanding Performance by a Female Actor in a Drama Series (The Morning Show). Brad’s award was announced first, and he was backstage when Jen was announced as the winner in her category.

A bystander managed to grab a quick video of Brad excitedly cheering for his ex as he watched her accept her award on a screen backstage. Then, the two actually crossed paths when Jennifer exited the stage and walked right by Brad backstage! Both stars were all smiles as Brad quickly touched Jen while she walked by.

Fans have been hoping for a romantic reconciliation between Brad and Jen ever since he split from Angelina Jolie in 2016. However, the pair’s relationship is strictly platonic. Despite their highly-publicized divorce, Brad and Jen have been on good terms for years. In Feb. 2019, Brad attended Jennifer’s 50th birthday party. He was also at her holiday party at the end of 2019, as well.

Meanwhile, the pair’s reunion for Feelin’ A-Live was much more than just a night of unrehearsed fun between A-List stars. The event was a fundraiser for the emergency relief nonprofit, CORE, which is currently providing testing and relief services for COVID-19 in the United States, and the REFORM Alliance, which is focused on passing laws to reform the criminal justice system and protecting the incarcerated population from the spread of COVID-19.