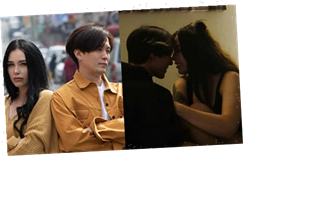 In his intense rant this week, Jihoon Lee had a lot to say about himself, his breakup, and about Deavan Clegg.

Among other things, Jihoon accuses Deavan’s new boyfriend of “pretending” to be Taeyang’s father.

“Deavan had a new man, even though we were still married, and this hurt very badly,” Jihoon lamented during his recent, lengthy Instagram rant.

He explained his recent fixation on grooming and his appearance, writing: “I thought Deavan had left me because I was a nobody.”

“So,” Jihoon continued, “I invested in myself because I wanted to make myself a better person.”

“It is so hard that I eat one meal a day,” Jihoon stated.

We think that he is saying that he is depressed, and is suffering a loss of appetite as a result.

“But, in order to meet Taeyang later,” Jihoon says, “I want to live only on the positive side and think about seeing him.”

“I have tried to be the mature one,” he claimed.

Jihoon continued: “And not bring this to social media or have part in any of the drama …”

“However,” Jihoon lamented, “now it’s becoming such a sickening issue.”

“And,” he adds, the breakup drama and fan reactions to it are “hurting me in such a toxic way.”

Jihoon stated: “And I’m trying to heal and be a better person.”

It is true that Deavan has moved on, though we cannot confirm Jihoon’s version of the timeline of Deavan dating again.

She and Jihoon broke up and she returned to Utah much earlier this year.

Deavan did share photos of her boyfriend holding Taeyang and the two of them even wearing matching shirts, though that is a far cry from someone pretending to be Taeyang’s father.

Deavan did not initially reveal her boyfriend’s identity.

She has since shared that he is actor Topher Park, linking to his Instagram so that fans could see what an absolute smokeshow he is.

Clearly, Deavan has an eye for major hotties … though Jihoon has implied that Deavan, who is herself white-passing and of Asian descent, may fetishize Korean men.

Part of what drove Jihoon to speak out in this rant was that he was bombarded with fan questions and accusations.

Though Deavan has said very little about their split, reports have said that there was some sort of accusation of abuse — possibly against Jihoon and against one or both of his parents.

With that in mind, some fans have been condemning him, and others accusing Deavan of “lying” … even though it’s unclear why they would think that, even if Deavan had spoken out. Which she has not.

For her part, Deavan has spoken about Jihoon’s rant this week … without directly addressing it.

She shared that her attorney had advised her to not say anything about Jihoon one way or the other, which makes sense (solid legal advice in most situations).

Additionally, she stated that Drascilla is the one who is hurting right now. We’re glad that Drascilla has her mother and grandmother for emotional support at this time.

None of us know what may have happened to prompt their breakup, as Deavan has not shared her side of the story in any form.

It is clear that both exes are experiencing a lot of hurt feelings, and that fan responses are making that worse.

But, for the record, Topher has never publicly said that he intends to “replace” Jihoon or immitate Taeyang’s dad. He’s literally just dating Deavan.