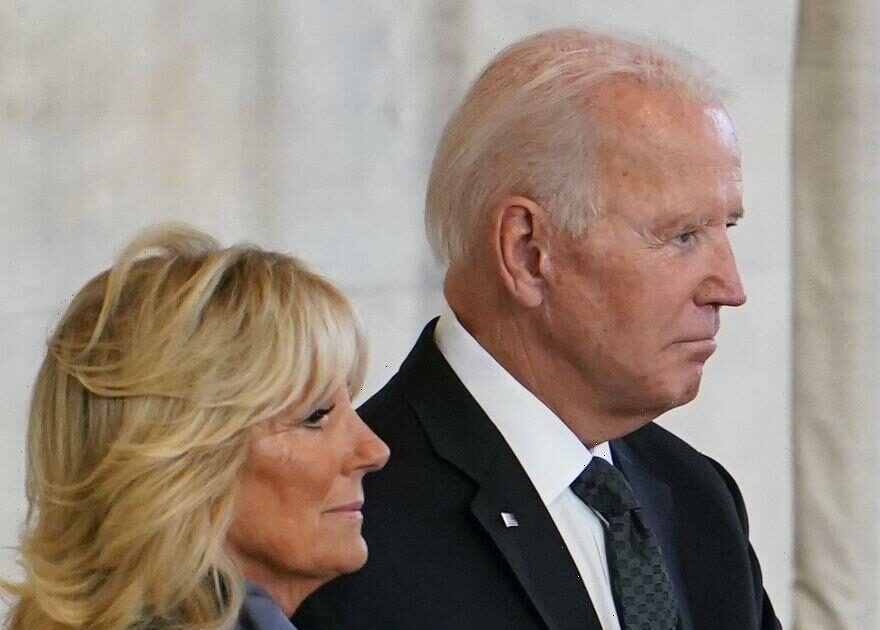 The US President, 79, and his wife arrived at the venue on Sunday evening and after spending some time witnessing the Queen’s coffin, they travelled to Lancaster House to sign the book of condolences.

During the signing, Joe explained why the late Queen reminded him of his own mother: “She had that look like, ‘are you OK? Anything I can do for you? What do you need?’

“And also ‘make sure you do what you’re supposed to do’,” he joked, wagging his finger. He added: “I have talked about how my mother and father thought that everyone, no matter who they were, no matter what their station, no matter where they are from, deserved to be treated with dignity.

“I think what she gave was a sense of, above all, the notion of service – we all owe something.

“There is something in our capacity to do that can make not just the world better, but your neighbourhood better, your household better, your workplace better, and that’s what she communicated to me and it was an honour to meet her.”

“You were fortunate to have had her for 70 years, we all were. The world is better for her.”

Joe and Jill met the Queen in 2021 at Windsor Castle for an afternoon with the monarch.

The president and Dr Biden left the castle after about an hour with the Queen.

He was the 13th American President to meet the late monarch.

Joe is one of the many guests that the King and Queen Consort are also hosting at Buckingham Palace, in what the King’s spokesman described as an “official state event”.

They are joined at the event by the Prince and Princess of Wales who greeted the many foreign guests arriving for the funeral.

Later today theQueen Consort, Camillawill pay a televised tribute to the late monarch, recalling her “wonderful blue eyes” and saying: “I will always remember her smile.”

This 100 page tribute looks back at the life of our most beloved monarch, Queen Elizabeth II, marking key events during her remarkable 70-year reign, as well as her childhood as a young princess, her enduring love for Prince Philip and her family, and the lasting legacy she leaves our nation.

This edition is available to buy in stores now or it can be purchased online here.

For all of the latest updates, sign up for OK!'s Royal newsletter

Camilla, 75, in pre-recorded words on the BBC, will speak of how Queen Elizabeth II was a “solitary woman” in a male-dominated world.

She will add: “I can’t remember anyone except the Queen being there.”

There will also be a service of reflection near Falkirk, Scotland at 7.30pm.