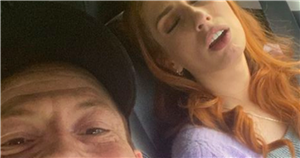 Joe Swash took to Instagram to share a hilarious picture of Stacey Solomon asleep during a car journey.

In the picture we see Stacey with her eyes shut and mouth open, snoozing peacefully, whilst fiancé Joe grins into the camera.

Joe wrote on the candid pic: “Thought I’d pick her up from work because she finished so late… Best company ever for the last 2 hours [laugh emojis].”

Stacey re-shared the picture on her own Instagram and joked about the lack of conversation in the car as she fell asleep.

The star told fans she was exhausted after her long day at work and was heading straight to bed once home.

The couple are known pranksters, with Stacey sharing footage of her sitting in a patch of poo in the garden just two days ago.

Her kids were laughing hysterically after she accidentally sat in a pile of poo in their garden.

Stacey is mum to 13-year-old Zachary, who she gave birth to age 17, with childhood sweetheart Dean Cox.

The bubbly TV star is also stepmum to Joe’s son Harry, who he shares with Emma Sophocleous.

Stacey may sleep soundly on long car journeys, but she’s also a creative mum in her waking hours.

She showed off the impressive creative feat on Instagram, writing: “So instead of hanging the flowers from the metal pole, I'm going to sort of stick them across this wood and then hang the whole thing up! Hopefully that will look better!"

Stacey also shared a cute video of everyone singing happy birthday to Rex for his second birthday.

Although fiance Joe likes to share cheeky videos of her sleeping, Stacey has admitted that she would be “devastated” if they broke up and he moved on with someone else.

After being asked by Charlene White on Loose Women how she would feel about Joe finding love with another woman, The X Factor singer said: “Maybe it's harder to say whether you'd be happy or not when you're in a happy relationship with someone that you love dearly. If things weren't going well and I thought he would be happier and I would be happier with other people then I might feel differently."