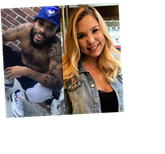 Kailyn Lowry is telling her side of the story.

As you may have read about on Thursday, Lowry was arrested in late September on a charge that she attacked ex-boyfriend — and two-time baby daddy — Chris Lopez.

According to the police report, Lopez claims that Lowry assaulted him in his apartment shortly after the two exchanged custody of their first son, three-year old Lux.

Lopez told authorities that Kailyn “struck” him “several times with a closed fist” after discovering that Chris had given the toddler a haircut.

This marked the child’s first-ever haircut and it was done without his mother’s permission.

Later on social media, after learning what Lopez had done, Lowry blased her ex as a deadbeat dad, saying Lopez is a “narcissist” who barely spends time with Lux and who uses the kid as a “manipulation tool.”

As for Lopez at that time?

He wrote some stuff on Instagram that is now worth analyzing in-depth.

“I don’t give a sh-t bro, they make sh-t so much worse,” Chris, proceeding to allude to what now seems liike a key aspect of the altercation:

“I guarantee you ‘cause why, it’s gonna f-ck sh-t up for them if they ended up telling that part.”

Might Lopez have been referring to Kailyn supposedly flailing at him with her fists?

And needing to be restrained by his sister, who has backed up her brother and who told police that she had to jump in and take Lowry off her sibling?

It certainly seems that way now.

“Christopher stated that he did not fight back, and that Kailyn then left the residence,” the police report also reads.

Kailyn, who is due in court for a January hearing, has now responded to these allegations through a representative.

“Ms. Lowry has filed a petition for custody in the matter involving her children Lux and Creed,” the Teen Mom 2 star’s rep said in a statement to Us Weekly.

“The judge in the Delaware Family Court has ordered the parties to refrain from discussing all domestic matters until after the hearing next year.”

Doesn’t sound like we’ll be hearing much from Lowry or Lopez about the other in the near future.

“Currently, Ms. Lowry has been awarded sole custody of the children despite the allegations pending in Family Court.

“Ms. Lowry does deny all of the allegations but cannot respond specifically at this time due to the orders of the judge.”

Lowry has sole custody of all four of her kids.

She has long said that Lopez shows next to no interest in serving as a father… stating this back after the former couple welcomed their very first child.

And then she went ahead and had a second with him for some reason.

When authorities spoke with Lowry by phone the day before her arrest, she also denied that she “became physical” with Lopez, according to the court documents.

Following her arrest, the MTV star was released on her own recognizance without bail and ordered to have no contact with Lopez.

Lopez, for his part, appeared to address the scandal soon after news of the arrest went viral.

“If it’s anyone to forgive right now, it’s yourself,” he wrote.

How… generous, we guess?

Based on all Kailyn has said about Lopez and the haircut and the former’s parenting in general over the past few weeks, she doesn’t sound like someone who’s too focused on herself these days.

Kailyn Lowry: Chris Lopez FORCED Me to Get a Paternity Test for My Baby!Start Gallery