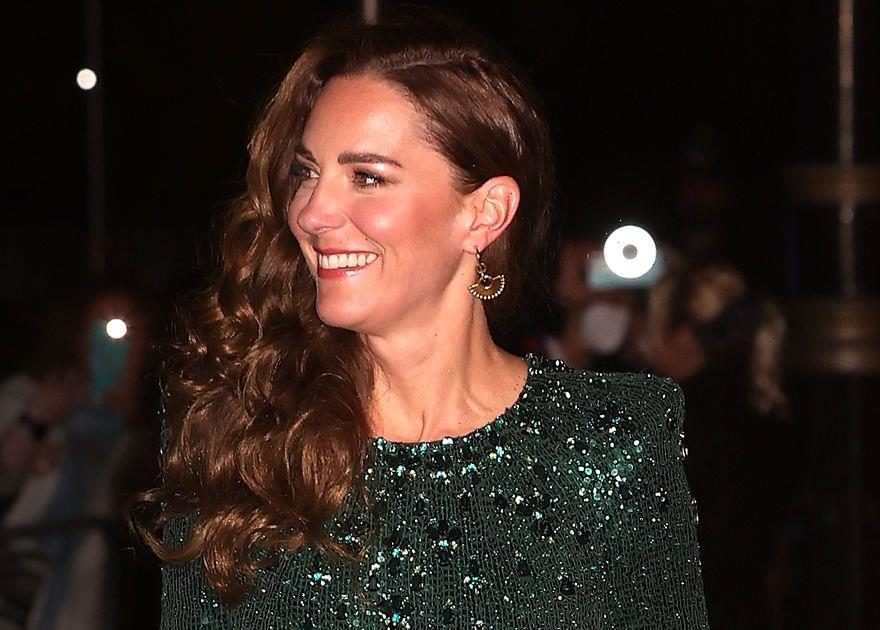 Prince William and Kate Middleton arrived on the red carpet for the annual Royal Variety Performance on Thursday night.

The couple dressed to impress with the Duchess of Cambridge, 39, wearing a stunning recycled green gown by Jenny Packham for the occasion.

While the Duke of Cambridge wore a velvet blue tuxedo complete with a black bowtie as they made a glamorous arrival to the star-studded annual event.

Kate oozed elegance in a floor-length green gown covered in sequins, she finished her look with chandelier hoop earrings and a simple clutch bag.

It is not the first time Kate has worn the dress either as she made an appearance wearing it during an official Royal Tour of Pakistan in 2019.

Despite wearing the same dress, Kate accessorised the look a little differently previously, opting for gold statement earrings and her hair pulled back off her face in a half up-do. The sold-out event, which is held this evening at the Royal Albert Hall in London, will be hosted by comedian Alan Carr, with performances from the likes of Ed Sheeran, Sir Rod Stewart and Jane McDonald.

The annual variety show is staged in aid of the Royal Variety Charity, whose Patron is currently The Queen. Funds raised from the event go to people from the entertainment industry who are in need of help.

This year's event is particularly significant as it marks 100 years of Royal patronage from the reigning monarch, with King George V having become the charity's first patron in 1921.

The performance is set to be broadcast by ITV in the run up to Christmas in December, with the date yet to be announced.

Meanwhile, the royals have been preparing their Christmas plans with it being the first they will all spend together since being separated by pandemic restrictions last year.

It will also be the Queen's first Christmas since the death of Prince Phillip earlier this year.

On the guest list will be her children Charles, Andrew, Anne and Edward, plus grandchildren including William and Kate and their children George, Charlotte and Louis. Prince Harry and Meghan Markle are also invited despite current tensions.

A Palace insider previously told the Mirror: "This year, more than ever, it is incredibly important to Her Majesty to be surrounded by loved ones. The Queen is totally committed to hosting everyone.