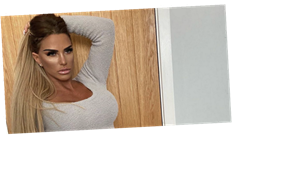 Katie Price has allegedly lost a whopping half a stone in just five days as she's been "in so much pain she can't eat".

The 42 year old, whose pink Barbie car was recently "returned to her" after it was "left with her ex Kris Boyson's dad", endured a gruelling six hour operation on 14 August after breaking her two feet in a freak accident in the south of Turkey.

Katie has been in "agony" ever since, with a source explaining that the pain is so horrific that she's stopped eating.

"Katie's on all these pain medications but she just can't sleep she's in so much pain," the insider told The Sun Online.

"She's gone off her food, which is unlike her, and has lost half a stone since the operation. She was already tiny, so everyone's trying to tempt her into eating again as she can't lose much more."

A representative for the former glamour model also confirmed the news as they told the publication: "Katie is certainly feeling exhausted after her most recent surgery – not being able to fend for herself and indeed prepare her own meals has had an impact on her weight, Katie has had an awful lot to deal with these past weeks.

"With rehabilitation commencing soon and planned nutritional balanced meals Katie will be back to fighting weight soon.

"Katie is already showing signs of a steady recovery."

The reality star recently opened up on her health condition on her Instagram feed, telling her 2.3million Instagram followers that doctors had to perform more procedures than they had expected during her surgery.

I'm A Celebrity…Get Me Out Of Here! 2020: All the famous names rumoured to be cast on the hit ITV show

As she posted a photo of herself sitting in a hospital bed with her beloved boyfriend Carl Woods sitting next to her bedside, she thanked fans for their support in the caption.

Katie, who compared herself to a James Bond villain in a video of herself having her veneers replaced, wrote: “Wanted to update everyone who has been sending all the beautiful messages to me," followed by a red heart emoji.

"so I’ve had my 6 hour op Unfortunately more Procedures was needed when they entered my feet than thought , but I’m lucky I have the chance to one day get on my feet again”. [sic]

She added: “Chelsea Westminster hospital nurses doctors have been amazing and the surgeons totally have my up most RESPECT and absolutely FANTASTIC very professional and have been very honest and straight with me to make me actually sink in my head the seriousness of my injuries MASSIVE THANKYOU”.

Katie went on to praised her boyfriend Carl, 31, for his support as she said: “and massive Thankyou to @carljwoods for constantly fitting me around his work and being by my side , loving knowing I’ve found the man that has surprisingly ticked every box [sic]

“I could only dream of a man to be like and knowing I’m spending the rest of my life with him,” [sic] followed by two red heart emojis.