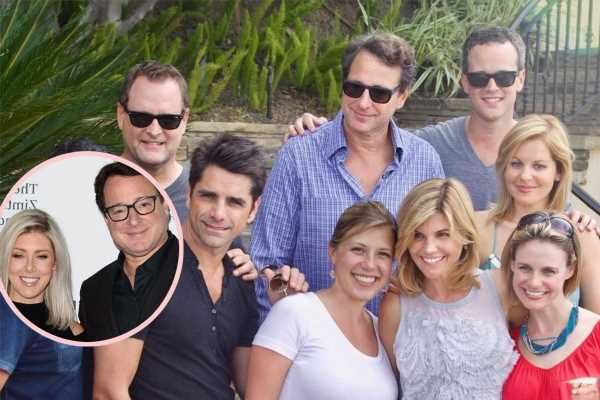 Exactly one year after Bob Saget’s heartbreaking death, his loved ones are honoring his memory.

How could anyone forget the fateful day America’s dad passed away? The comedian tragically and unexpectedly died last January after suffering head trauma while staying at the Ritz-Carlton in Orlando, Florida. The actor left a massive hole in the hearts of many, and on the first anniversary of his death, some of the people he held closest in his life are opening up.

In a Monday post, Bob’s wife, Kelly Rizzo, uploaded a heartfelt tribute of pictures and videos, set to the tune of The Luckiest by Ben Folds – one of his “favorite songs.” She wrote:

We can’t even begin to imagine how difficult it’s been for the widow, but we’re so glad she has so much positivity to look back on. As for the late star’s on-screen family, his Full House co-stars didn’t shy away from commemorating their television patriarch. The same day, John Stamos, who played Jesse Katsopolis — the brother-in-law- to Bob’s Danny Tanner — also took to IG, where he showed off a clip of themselves in between takes for the show. You can hear Stamos saying:

“What you see up here is really how it is. We’ll never have another show like this.”

“We really love each other… There’s not one fight in six years, we really get along, I look forward to seeing everybody.”

In the post’s caption, he wrote:

“‘The most lost day in our life is the day we don’t laugh’. It’s hard sometimes Bob without you, but we’ll try. We’ll keep loving and will keep hugging just like you want us to.”

Dave Coulier, who played Joey Gladstone on the fan favorite show, also took to the photo sharing app to post a hilarious photo of the two, which he sweetly captioned:

“Bob could always bring out the 5th grader in me. I met him when I was just an unknown, 18 year-old standup at a small club in Detroit. We became instant brothers. Sometimes, I still grab my phone, ready to share one of the hundreds of silly bits that we did together. At some point today, I’ll think about how much I miss him and I’ll shed some tears. Then I’ll hear Bob’s voice, and it’ll make me laugh.”

Candace Cameron Bure, who played Bob’s on-screen daughter D.J., also got into the mix, posting an adorable throwback photo of themselves. She wrote:

“I stayed up for hours watching videos of Bob on my phone. Videos I couldn’t watch a year ago because it hurt too much. Last night they made me laugh. They comforted me and warmed my heart. I watched them over and over and laughed so hard. I miss him so much and I’m grateful he was my friend for so many years.”

Awww. We’re glad the memories are beginning to offer her comfort and not just sadness.

Finally, Bob’s other on-screen daughter, Jodie Sweetin, who played the sassy Stephanie, took to IG to share a lengthy tribute. She captioned her selfie with the late actor:

“I just wanted you to know, I’ve thought of you every day for the past year. It’s just not the same without you with us, and I don’t think it ever will feel like that again. I wish you had been here over the last year, oh… there’s so many moments you were supposed to be here for. So many times I thought of calling you and thinking, ‘What would Bob do in this moment?’ Mostly the answer to that is ‘make a joke about it’… so I do that. A lot. Even when I probably shouldn’t, but it’s those moments when I hear you just over my shoulder, laughing the hardest. So many times, just in my own life this year, that I wished I could hear you were proud of me. But I hear it anyway.”

“You will always remind me to love bigger, laugh harder, and hug like Bob Saget.”

If we take anything from these posts, it’s LOVE, and knowing just how much of a positive impact Bob had on the lives of so many! We can’t believe it’s already been a year, but his memory will live forever. Rest in peace to a legend.