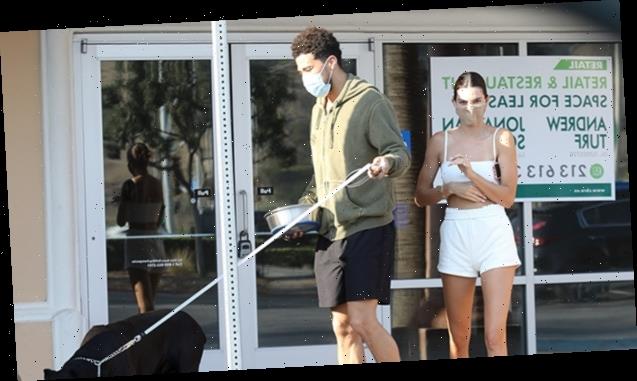 Things are heating up between Kendall Jenner and Devin Booker! Amidst speculation that they’re dating, the pair stepped out together once again on Aug. 17.

Kendall Jenner spent some more quality time with her rumored boyfriend, Devin Booker, in Malibu on Aug. 17. The two were photographed running some errands together, with the NBA star walking his dog as Kendall strolled by his side. The supermodel rocked a matching, white crop top and shorts set, putting her abs and legs on full display as she tried to beat the California heat.

This latest outing for Kendall and Devin, who was previously linked to Jordyn Woods, comes after several months of speculation of a romance between them. The buzz began at the end of April when the two were spotted taking a road trip to Sedona, Arizona together. However, they were joined by other pals on the excursion, and at the time, it was reported that they just ran in the same group of friends.

Plus, Kendall shut down talk about the rumored relationship on Twitter. After a hater posted a meme that joked about NBA players ‘passing’ Kendall around, the 24-year-old clapped back. “They act like I’m not in full control of where I throw this cooch,” Kendall wrote. She has yet to directly address whether or not she’s dating Devin, but this tweet definitely got people to stop criticizing her about it!

After the road trip, Kendall and Devin were spotted together again over Memorial Day weekend in May. They then went on a dinner date in June, and earlier this month, they got flirty with one another on Instagram. On Aug. 10, Kendall posted a video of herself on Instagram with a strawberry emoji as the caption. This prompted Devin to comment, “I like strawberries,” and Kendall responded with even more emojis of the fruit. Afterward, fans went wild over the apparent flirtation.

As HollywoodLife EXCLUSIVELY reported, though, things aren’t super serious between these two just yet. “For right now, she’s just having fun with Devin,” a source explained. “It isn’t anything serious, but she does like hanging out with him. It seems to just be easy [between them].”