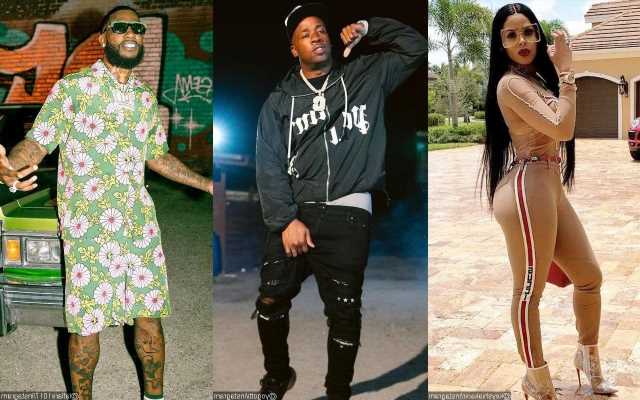 During his livestreaming, DJ Akademiks insinuates that the model slept with the ‘Rake It Up’ spitter, whom she used to date before being exclusive with the ‘Wake Up in the Sky’ rapper.

AceShowbiz -Is Keyshia Ka’Oir being unfaithful to Gucci Mane? Apparently, DJ Akademiks believes so. The Instagram blogger accused the model of hooking up with Yo Gotti when her  rapper husband Gucci Mane was serving time in jail.

During his livestreaming, Akademiks insinuated that Keyshia slept with Gotti, whom she used to date before being exclusive with Gucci. The DJ said that men weren’t able to “get over a woman’s past,” before adding, “Gucci had to.”

“Hold on now, and I’mma be really respectful as I talk about this, because if we really talking about Gucci and his wife, a lot of y’all n***as be like, ‘Gucci’s wildin’,” Akademiks continued. “Y’all know allegedly Gucci’s wife, while he was locked up, slept with Yo Gotti, right? Allegedly. That’s why he cussed out Angela Yee… That’s why he was mad at her.”

He went on saying, “Gucci, at that time, was f***ing mad b****es, but the girl that he was gonna settle down with, that he always had an extra s**t for, was Keyshia Ka’Oir,” said Akademiks. “However, he wasn’t with her his whole time. He was also kind of running around a little bit. When she decided to do her a little bit, allegedly, she might have been with Yo Gotti.”

“Like, most of y’all, y’all demonize any girl that was ever with another rapper that y’all could recognize. Gucci married his girl, he realized she was a good girl who held it down and who also helped him out with a lot of s**t,” he went on to say. “I don’t know if y’all would do that.”

Neither Gucci, Keyshia nor Gotti has responded to AK’s claims.

Gucci and Keyshia got married in a lavish wedding on BET in October 2017, for their reality show “The Mane Event“. However, it was revealed in 2019 that the pair apparently tied the knot prior to the show, confusing fans.

While celebrating their 2nd anniversary, Keyshia took to her Instagram account in May of that year to share a slew of pictures of herself and her husband aboard a yacht. “Today, May 14th is our day for many beautiful reasons!! We met 5/14/10 Got married 5/14/17 #TheWopstersAnniversary #514 #1017,” she wrote in the caption.