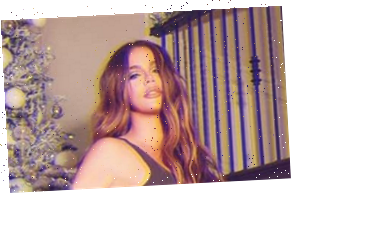 Lately, most of Khloe Kardashian’s critics have been taking aim at her ever-changing face.

But her most recent post is stirring pure outrage … and Khloe is clapping back.

In a set of new photos, Khloe is posing in front of a Christmas tree (devoid of color, as the Kardashians seem to love so much) surrounded by Louis Vuitton bags.

Posing in lingerie and a robe and some seriously good boots, she wields one of the bags.

As you can tell from these photos, she progressively swings the pricey designer handbag in an arc through the air.

“(In my best Kim K voice)” she clarifies, for some reason adding her famous sister’s last initial as if to clear up confusion.

She is referring to one of the best-known Keeping Up With The Kardashians memes on Earth, a moment quoted by people who have never even dreamt of watching the show.

This iconic moment may have been on Khloe’s mind.

But at a time when tens of millions of American families are struggling just to keep themselves alive in this devastating pandemic, fans had other things on their minds.

Intentionally or not, Khloe has a small army of designer bags around her … just two of whicha mount to more than the pitiful, disgustingly low payout authorized by Congress this week.

“We already know you’re rich,” wrote another with resignation.

The criticisms piled on. This is not the year to be flaunting extreme wealth, as Khloe should remember from Kim’s birthday bash.

But in addition to heaps of praise, Khloe also had people stepping up to defend her from any and all criticism.

“People are so ducking rude,” commented one defender.

“Leave her alone,” the commenter demanded, “and get yourselves a blowup doll.”

Instead of responding directly to her critics, Khloe replied to this defender.

(Kind of like blessing your allies instead of cursing your enemies, you know?)

Khloe replied with a series of laughing-to-the-point-of-tears emojis to the creative rebuff.

Of course, Khloe is no stranger to criticism on her photos.

“Why do you look so different in all your photos?” fans recently asked.

Khloe came up with her own clapback at that point, writing: “From my weekly face transplant, clearly.”

Khloe’s deflection from her own shape-shifting is hardly the only thing on her mind.

Right now, her baby daddy Tristan Thompson is playing for the Celtics, a sports contract that will greatly enrich him … but keep him in Boston for some time.

Khloe, as a co-parent, has to work out how to keep True with both parents.

As a partner, she is likely anxious on some level about the next time that Tristan cheats.

(Realistically, it would be more shocking to most people if Tristan did not cheat on Khloe, as his pattern of behavior suggests that it is inevitable)

Khloe also sees no end of criticism for continuing to associate with him as anything more than a co-parent. Fans want her to respect herself.

But when it comes to displaying her extreme wealth while families take out loans to keep the lights on, fans just want her to understand where people are coming from.

The pandemic isn’t her fault. Systemic poverty, wage stagnation, and a gutting of social safety net protections is not her fault.

Just, like, pose with a bag if you want to, but maybe don’t rub it in people’s faces that you literally can only imagine what it’s like to struggle financially.