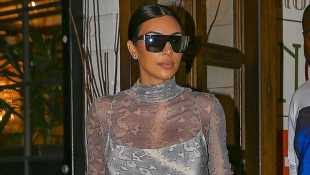 Kim Kardashian, 38, turned heads when she stepped out to get Mexican food with her husband Kanye West, 42, on Aug. 5! The Keeping Up with the Kardashians star wore a long-sleeved gray see-through snakeskin print dress for the Los Angeles outing along with big black sunglasses while Kanye wore a long-sleeved white graphic shirt and white baggy pants. Kim had her hair back and wore matching silver flip flops during the outing and also held onto a matching clutch.

This isn’t the first time Kim has wowed in snakeskin print. The brunette beauty has worn the pattern in many forms of clothing on various occasions in the past. One look consisted of a long gray and white snakeskin skirt with a slit and a solid white top while another had her rocking a fitted long-sleeved pink snakeskin print dress.

It’s always great to see Kim getting bold in her stylish snakeskin print looks! As with everything she wears, she knows how to represent the pattern well and inspires future fashion choices for her followers. We can’t wait to see what other trend Kim comes up with next but for now, we’ll just enjoy these snakeskin looks!