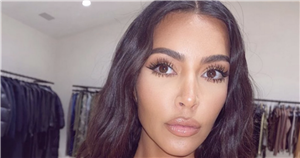 Kim Kardashian has been slammed for treating her daughter North West's bearded dragon "like a doll".

The 40 year old, who was recently left stunned as a Bridgerton star confirmed Keeping Up With The Kardashians inspired the hit show, took to her Instagram feed to share a series of photos of the lizard in different outfits.

In one snap, the reptile, who's named Speed, wore a pink baseball cap that had the word "Sports" written on it and rested next to a tiny microphone.

A second saw the pet wearing a messy pink wig while appearing to hold a matching pink toy electric guitar, while a third showed Speed wearing a pair of pink and yellow glasses while next to a Strawberry-flavoured candy.

However, the post sparked outrage amongst her 215million followers as one person said: "This is ignorant," while another criticised her by saying: "not even funny," [sic] with a sad face emoji.

A third demanded Kim "stop treating that poor creature like a doll," as another accused her of "tormenting this poor creature".

"Ridiculous. It's an animal, a pet … not an object you can dress up and make money off of.

"Bearded dragons love and connect. Let's hope you keep him for a while and not just throw him away when you're done with the pics." [sic] a fifth added.

Kim announced the addition to the family back in March this year as she posted a photo of her seven year old daughter North West wearing a pink fluffy jumper as she held Speed up, who could be seen wrapped in the same material.

"Meet the newest member of our family…Speed," Kim wrote. "I really wasn’t planning on liking Speed the way I do but she grew on me!"

Kim, whose estranged husband Kanye West is reportedly "heartbroken" but has "finally accepted" the divorce, went on: "Speed was really my BFF Allison’s and we babysat for a week and she never left and it’s been months!"

"Speed got a makeover with custom Skims Cozy and even the Lil Uzi jewel (Speed actually got the jewel a few months back; North always knows what’s up!). North and her bearded dragon go everywhere together it’s kinda cute!"