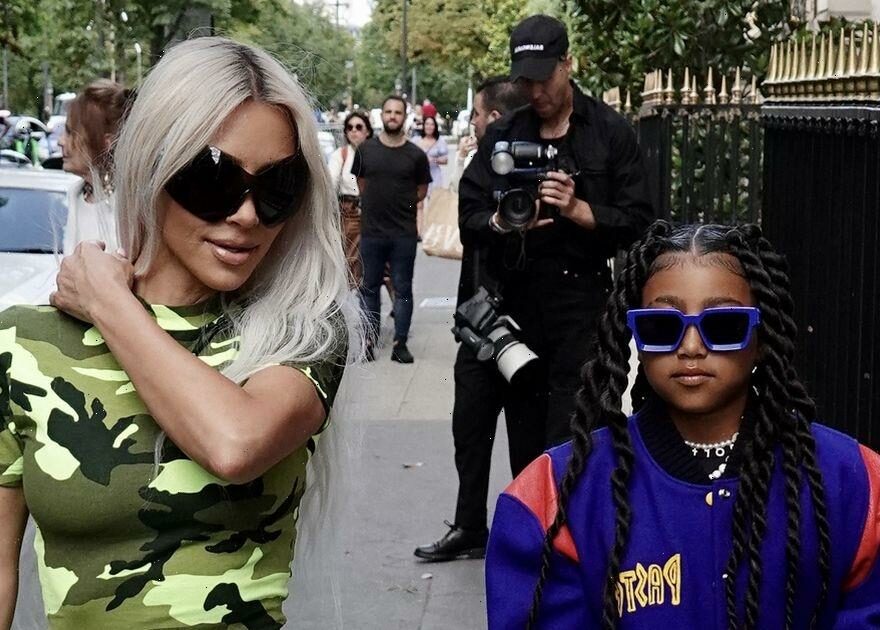 Kim Kardashian made quite the fashion forward appearance with her daughter North West as the pair arrived in Paris for Fashion Week on Tuesday.

The 41 year old was joined by her nine year old daughter shared with ex Kanye West as they enjoyed an outing soon after they landed in the French capital.

North proved she was just as stylish as her parents as she wore a bold blue bomber jacket with a pair of oversized sunglasses in a matching colour, black trousers and a black T-shirt underneath which she accessorised with a chain necklace spelling out her name.

The style icon in-the-making had her hair styled in long twists and paired her trendy ensemble with a mini black handbag and some rather big black platform shoes with a large silver plate at the front, designed as part of the Balenciaga X Crocs shoe collaboration.

Making sure not to be upstaged by her daughter, Kim vibrantly stood out wearing a pair of bright neon leggings that turned into pointed boots, also designed by Balenciaga.

The SKIMS founder showed off her 21lb weight loss in the leggings as they hugged her figure tightly and she matched them with a camouflage print cropped T-shirt.

Kim added over-the-top accessories to go with her striking outfit during the outing, as she wore large black alien-shaped sunglasses and held on to a sparkly silver handbag, and wore her bleached white mane loosely with extensions, adding even more drama.

Kim’s Paris Fashion Week trip with her daughter comes after she recently gave fans a glimpse into North’s ninth birthday party, which was coined “Camp North”.

North turned nine on 15 June and enjoyed quite the luxury celebration, as mum Kim spoilt her with a trip to a campsite with was decorated with fairy lights and tents and an inflatable boat for guests to ride on in the river.

North flew on a private jet to her party destination and inside the plane, named ‘Kim Air’, balloons were decorated all over and spooky spider webs were added, along with camping accessories.

Among the attendees to North’s party was her cousin and Kourtney Kardashian's daughter Penelope, nine, shared with ex Scott Disick.

Kim received praise from fans for the party she threw for her daughter, as one person wrote: “Omg you’re the best mom”, while another added: “This is amazing" with heart emojis.