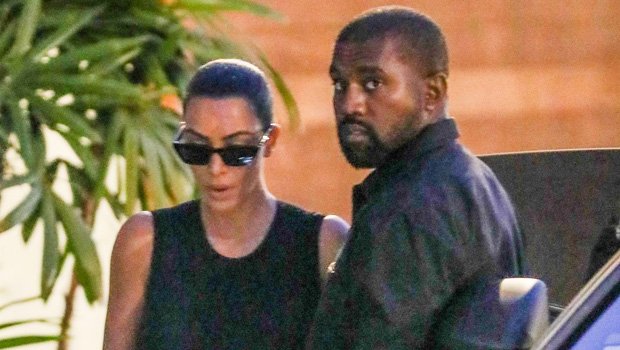 Kim Kardashian stepped out looking amazing in a figure-flattering black outfit when she enjoyed a night out with husband Kanye West at Cafe Habana in Malibu, CA on Aug. 31.

Kim Kardashian, 38, showed off her great sense of style when she went on a rare date night out her husband Kanye West, 42, on Aug. 31. The lovebirds stopped at Cafe Habana in Malibu, CA for some good eats and of course they got a lot of attention during the outing. Kim chose to wear a black sleeveless top and matching black leather pants for the dinner trip and had her hair tied back in a long braid. Kanye also looked good in a black jacket over a white T-shirt and baggy tan pants. After the dinner, the couple was spotted chatting it up with friends before driving away in their car with Kanye behind the wheel.

Kim and Kanye’s kidless outing together comes just a few days after they were spotted with two of their four kids at Cheesecake Factory restaurant in Ohio. They showed up to the establishment two days in a row on Aug. 23 and Aug. 24 with oldest daughter North, 6, and oldest son, Saint, 3, and fans were quick to take notice and post funny photos online. They were in Dayton for Dave Chapelle‘s Gem City Shine Benefit, which Kanye’s church service was a part of.

When Kim and Kanye are not out and about alone or with their kids, they’re thinking of the future of their family. The Keeping Up with the Kardashians star recently admitted that although she loves all four of her kids, which also includes Chicago, 1, and Psalm, 3 mos., she’s not looking to have anymore anytime soon. “I LOVE my babies so much, but 4 is all I can handle with how busy I am, and each one of my babies needs so much attention,” she wrote in her Instagram story on Aug. 29.

It’s always great to see Kim, Kanye and their kids on family outings that prove they’re just like any other loving family wanting to have fun times!