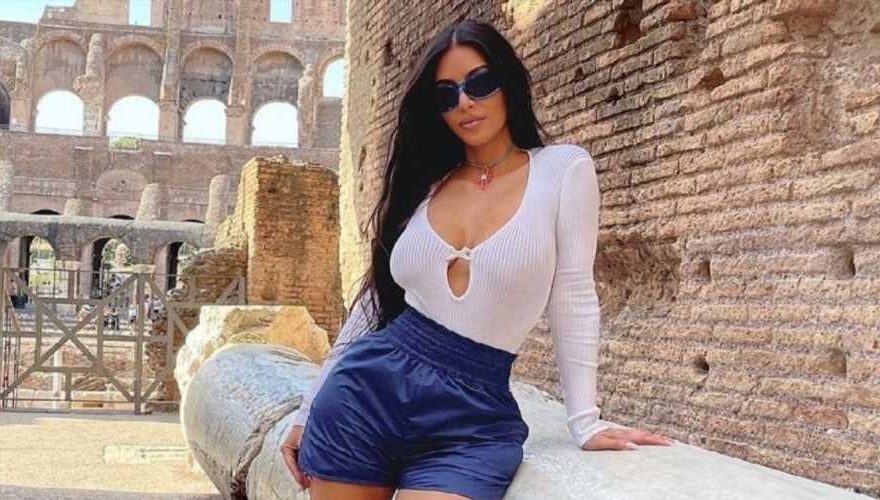 We'd imagine pulling off head to toe spandex isn't easy, but then again, if anyone could do it, it's Kim Kardashian. And she did just that during her latest outing to her and her family's favorite dinner spot, Nobu in Malibu.

On Tuesday night, the Skims founder attended her pal and luxury floral designer Jeff Leatham's 50th birthday dinner at the celebrity hotspot. And she arrived dressed in a confusing black spandex Balenciaga outfit that featured an asymmetric long-sleeve top with gloves that had half a sweetheart neckline, as well as a billowing black cape that flowed behind her when she walked. The look continued into black spandex pants that transitioned into boots. The reality-star-turned-businesswoman paired the edgy ensemble with a sparkly, all-crystal encrusted Balenciaga handbag and skinny silver mirrored sunglasses, despite the fact that it was nighttime when she arrived.

She posted videos to her Instagram story documenting the very over-the-top outfit, as well as the lavish birthday dinner that included special menus and floral center pieces. In one story, Kardashian and her friend Tracy Romulus joined in a "cheers" as Kardashian held her cocktail in her spandex-clad hand while overlooking the Malibu shore. Kim arrived in a Rolls Royce alongside her mom and manager (momager) Kris Jenner and her boyfriend Corey Gamble. The three appeared to be in good spirits (who wouldn't be on their way to eat upscale sushi?), and they have a lot to smile about these days. Yesterday, the youngest of the Jenner/Kardashian clan Kylie Jenner officially announced she's expecting her second child with on-again boyfriend Travis Scott. Their adorable daughter Stormi Webster seems ready to take on the role of big sister.