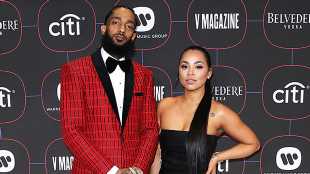 On what would have been Nipsey Hussle’s 34th birthday, his longtime partner, Lauren London, took to Instagram to share another sweet tribute to the rapper.

Nearly five months after Nipsey Hussle’s death, the rapper’s friends and family are remembering him with birthday tributes on Aug. 15, the day he would have turned 34 years old. Of course, that include Nipsey’s girlfriend, Lauren London, who took to Instagram — WHICH YOU CAN SEE HERE — to show him love with a sweet post. “Today we celebrate you my beloved,” she wrote. “Today we honor you King. We are to live in our highest vibrations today because that is how Nip lived his life. We should encourage and inspire today because that is how Hussle lived his life. Today we should love and give truth because that is how He lived his life. His Purpose still lives on with us all. Ermias wasn’t a sad soul. He was a powerful strong magical soul. Today is the day we lift up. Long Live My other half. My beloved King. Ermias. Nip Hussle the Great! I miss you. I love you. Still here holding it UP!” Lauren and Nipsey were together for six years at the time of his death, and have one son, Kross, 2, together.

Friends, family, loved ones, the hip-hop community, fans all around the world and more continue to mourn Nipsey after he was tragically shot and killed outside his store in Los Angeles on March 31. Lauren has received an outpouring of support, but her world has obviously been rocked by this loss. In the months since Nipsey’s death, Lauren has shared quite a few tribute posts on social media, while also speaking publicly about how much he meant to her and their family on more than one occasion.

First, Lauren spoke at Nipsey’s public Celebration of Life memorial, which took place on April 11. She also attended the 2019 BET Awards in her man’s honor — he was posthumously given the Humanitarian Award at the show. She was joined by Kross, as well as Nipsey’s daughter, Emani, 10, from a previous relationship, and other family members at the event.

In addition to the Humanitarian Award honor, the BET Awards also paid tribute to Nipsey with a special performance. Stars like DJ Khaled, John Legend, YG and more hit the stage to perform in honor of Nipsey, while T.I. introduced a slideshow that featured a montage of his life. Clearly, his memory will continue to live on.