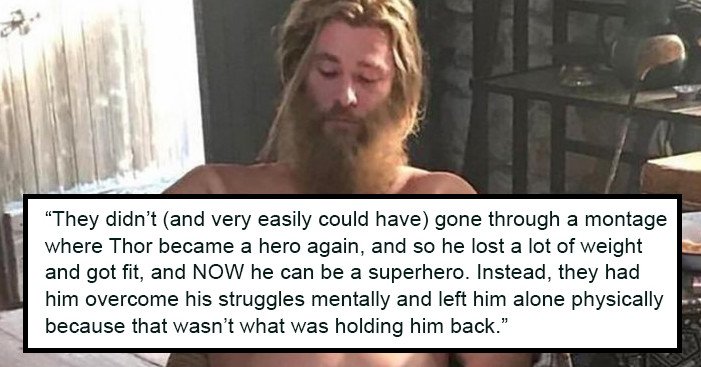 1.Re: the “Drunk Taylor Swift” meme that’s been going around the internet…

“Homegirl has been through enough. Let her get weird in peace. I got drunk and w e i r d on Friday. It makes me happy to know Taylor did, too. Keep on, girlfriend. Keep. On.”

2.Re: Chris Hemsworth talking about transforming into “Fat Thor” for Avengers: Endgame…

“OK, yes, I understand why it was frustrating to use fat Thor as comic relief, but as someone who is ‘fat,’ I also want to say that this representation of Thor was also really amazing and inspiring to me.

He was depressed, and it showed through his weight (I also gained weight because of my depression). But when he came out of it, he didn’t lose all the weight to become Thor again. He was still Thor. He was fat and still able to be a freaking awesome superhero. He could still do all the things that fit Thor could do.

They didn’t (and very easily could have) go through a montage where Thor lost a lot of weight and got fit in order to be a superhero again. Instead, they had him overcome his struggles mentally and left him alone physically because that wasn’t what was holding him back.”

3.Re: the fact that Caitlyn Jenner posted pics of Kendall on KYLIE’S birthday…

“I guess it IS hard to keep up with the Kardashians/Jenners.”

4.Re: Green Shirt Guy laughing his head off at anti-immigration protesters… 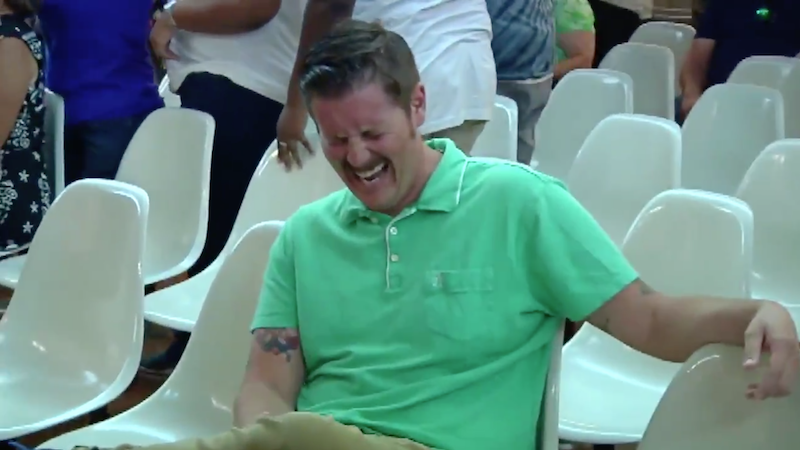 “He has Ron Swanson energy.”

5.Re: this roundup of 18 male authors who need to be banned from writing female characters for life…

“If someone describes my vagina as slushy or anything close to that, pants are going back on, and I’m going home.”

6.Re: news that Tana Mongeau and Jake Paul aren’t legally married after all…

“Yeah, as soon as I signed my marriage license, I immediately felt a rush of air bubble up from my chest and out my mouth and nose.

I assume that was the spirit of love exiting my body in preparation for my relationship becoming a cold, static business arrangement. Or it was reflux, I’m not a doctor.”

7.Re: these 31 minuscule Harry Potter details you probably never noticed… 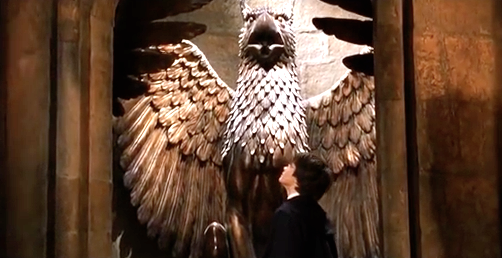 “Never twigged onto the fact that Dumbledore’s door was of a Griffin, making it a ‘Griffin Door.’ Well, now I just feel dumb.”

8.Re: the death of Jennifer Garner’s pet chicken…

“Growing up, we had a chicken that lived until it was 11!!! Not even kidding. Her name was Booger, and she was awesome. I can’t remember what kind of chicken she was, but we were at a reptile expo thing, and she was being sold as food for snakes and reptiles. My brothers and I convinced my dad to buy her and the three ducklings that were in the cage with her, and she was the coolest animal we ever had.

She’d come inside at night, and she had her own little ‘room’ under our basement stairs. The three ducks lived really long too. One of them, Egor, lived until he was 12, and one unfortunately got killed by a coyote. But Ruby, the third duck, lived until she was 5, but had some weird disease where she couldn’t lay eggs, so it shortened her life.

My dad now has another chicken and he’s like 6 or 7 years old now. I’m not sure if this is normal or not but unless my parents, like, swapped out our chicken/duck when they died (which is pretty impossible because they were all very unique-looking and my parents were very honest to us about death and losing pets), they can live a long time. I think the oldest chicken on record was like 14 or 15 years old.”

“I also came into my parents room once to get Neosporin and found my dad duct-taping my mom to the bed. I got out of that room as fast as humanly possible.”

10.Re: this hilarious post about strangers on the internet discussing everything from subtitles to emojis…

“I’ll stop watching shows with subtitles when they stop making actors whisper during dramatic scenes. Like, I know the character is upset, BUT CAN YOU SPEAK UP?!?!?!”

11.Re: this roundup of tweets for single people…

“Dating is too hard. Love your animals.”

12.Re: this crowdsource request for Boomers to tell us what they dislike about Millennials…

“I’ll be 65 next January; I honestly have no issues with Millennial culture. My generation grew up with long hair, Zeppelin and Vietnam protests. You don’t think the Greatest Generation hated us? Born in ’55, I’m smack dab in the middle of the Baby Boom. I was 14 when Armstrong and Aldrin walked on the moon. Boomers were observers. We had nothing to do with that. Frankly, I’m embarrassed by the general dung pile my generation left for you guys to clean up, but I have nothing but hope that you won’t make the same mistakes we did.”

13.Re: people tweeting about their eyebrow journeys…

14.Re: a roundup of seven movies coming to theaters that you won’t wanna miss…

“The dryness of this comment required me to take a swig of my drink.”

15.And finally, re: people texting their “number neighbors” and the very mixed bag of results they got…

“A number neighbor did this to me years ago. They sent me a YouTube link. I was rickrolled.”