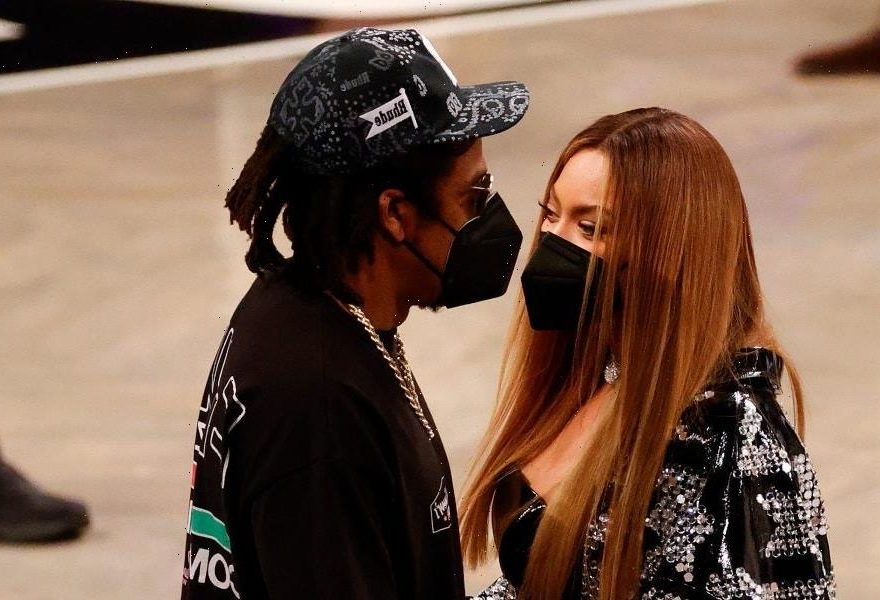 2003. Mr. Carter shows off his Jordan jersey while Beyonce watches the action during the NBA All-Star game.

2004. The couple were joined by  Sex And The City’s Kim Cattrall at the New York Knicks vs. Rockets game at Madison Square Garden.

2004. Bey breaks to dig through her purse while Jay enjoys the game.

2004. They happy couple attend game three of the Eastern Conference quarterfinals of the 2004 NBA playoffs.

2004. The Carters stay close during a New Jersey Nets game.

2005. Jay-Z and Beyoncé catch the action between the Miami Heat and the New Jersey Nets in game three of the Eastern Conference Quarterfinals during the 2005 NBA Playoffs.

2006. Jay-Z and Beyonce get lost in the action at another Nets game. We can see the love!

2006. Jay-Z and Beyoncé bring their date night to Miami.

2006. Not yet “The Carters,” things get a little intense courtside at an Indiana Pacers game.

2006. Beyoncé brings her Texas style to Miami for another courtside night with her future husband.

2007. The future Mrs. Carter was all smiles courtside with her man.

2007. The couple take a break from the limelight of Las Vegas to take in a USA Men’s Senior National Team game.

2008: Smiles all around when Kanye West joins the duo for a Nets game.

2008. Beyoncé holds Jay-Z tight while they watch the game with NBA legend and Hall of Fame inductee Hakeem Olajuwon in her hometown of Houston, Texas.

2008. The newlyweds enjoy each other and a playoffs game in Boston.

2008. Julia Stiles joins the Carters for another evening with the NBA.

2009: Jay-Z and Beyoncé sit in the audience during All-Star weekend in Phoenix, Arizona.

2010. Kelly Rowland joined the Carters for a Boston Celtics game during the NBA Playoffs in Boston, Massachusetts.

2010. Jay-Z, Beyoncé and her nephew Daniel Julez Smith watched the Nets go up against against the Detroit Pistons.

2012. Bey keeps it cute and casual while courtside with her man during a Miami Heat home game.

2013. The Carters get caught on camera at the NBA All-Star game in Houston, Texas.

2014. Jay-Z and Beyoncé giggle on the sidelines at the NBA playoffs in Brooklyn.

2014. The couple share a look of love during a timeout at a Nets game.

2014. Six years into their marriage, Jay’s still making Bey blush like she’s on a first date.

2014. Jay-Z keeps his lady close on the sidelines at a Nets playoff game in Brooklyn.

2014. Beyoncé keeps it casual while relaxing with her hubby at a Brooklyn Nets game.

2015. Jay and Bey share a moment courtside in Brooklyn while they enjoy a friendly rivalry at the Nets vs. Houston Rockets game.

2016. Beyoncé and hubby attend a basketball game between the Golden State Warriors and the Los Angeles Clippers in Los Angeles.

2016. Over the weekend, Beyoncé and Jay-Z’s courstside swag ruled our feeds when they were spotted attending the Golden State Warriors vs. Los Angeles Clippers game in Los Angeles.

At the Golden State Warriors vs. New Orleans Pelicans playoff game in April 2018, the Carters sat courtside and looked oh-so in love!