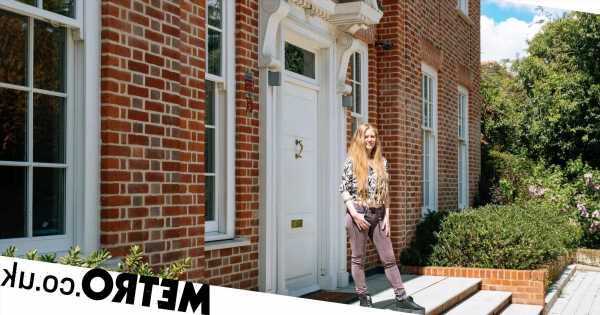 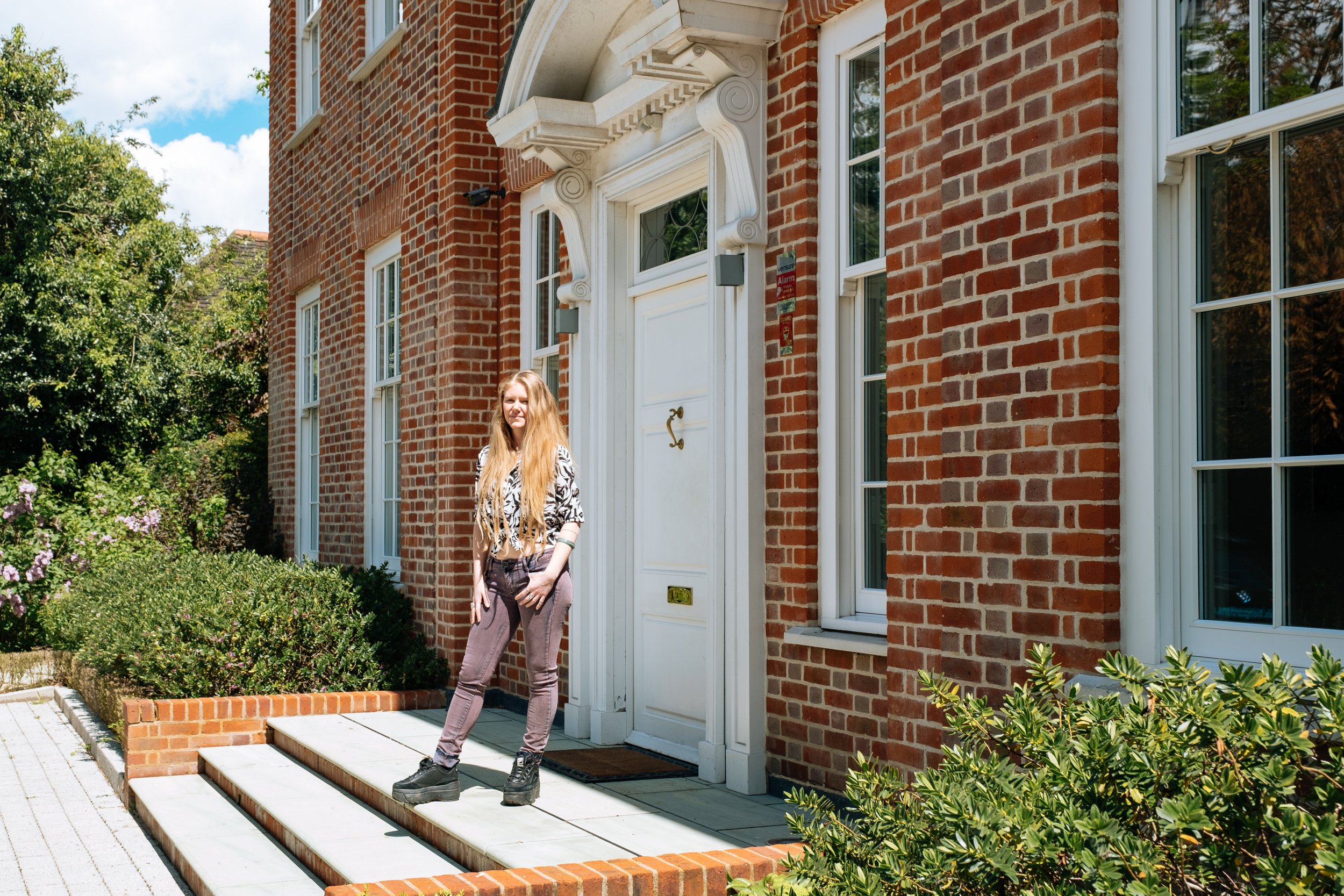 Stephanie Bennett calls this fabulous London mansion her home, and yet pays just £750 a month for the privilege.

She is a property guardian, sharing the 11,000sq ft house with one other guardian.

She is part of Britain’s burgeoning number of tenants — the size of the private rented sector has doubled since the early 2000s — although most will not be choosing such a temporary solution.

Today, we talk to three different sets of tenants: Stephanie — whose arrangement, despite the apparent bargain, really wouldn’t suit most people; a private renter who lives in a two-bedroom house in Surrey, and two friends who rent an apartment in Manchester at one of the growing number of Build To Rent schemes.

Nearly one in five — or 4.4million — households in England rent, but in London nearly a third of the population live in a rented property.

Just under half of private renters are aged between 25 and 34, while over a third have dependent children.

Though many would prefer to buy if they could afford to, research by residential rental company Uncle shows that 15% prefer renting to home ownership because it gives them the freedom to live where they want, with 2% planning always to rent.

According to Zoopla the average rent nationwide, excluding London, is now £923 per month, an annual rise of 3%.

London is a more costly proposition. Despite rents in the capital falling 9.4% in the past year, even in the cheapest borough, Bexley, a two-bedroom home costs an average £1,243 a month.

In the most expensive, the City, tenants typically fork out £3,284 for a similar property.

Living in a multi-million pound modern mansion in one of north-west London’s most prestigious postcodes, for a fraction of what you’d pay for a room in a regular house, might sound too good to be true — but for Stephanie Bennett, it’s a reality.

That’s because Stephanie is a property guardian for Live-in Guardians and in return for low rent, she resides in otherwise empty but habitable buildings.

This arrangement gives owners peace of mind, as properties that are protected by being occupied are far less likely to be broken into, squatted or trashed than if they were left vacant and patrolled by security teams.

Unlike with standard rentals, guardians pay licence fees rather than rent, and are on 28-day rolling contracts which give flexibility — plus the chance to live in some incredible buildings in amazing locations.

Depending on what’s available, they have the choice of schools, churches, banks or pubs, all kitted out with hot water, electricity, proper bathrooms, bedrooms and shared living spaces.

‘I discovered Live-in Guardians through word of mouth when I returned from travelling four-and-a-half years ago and was looking for a cheap room in London,’ explains Stephanie, who works on projects for Dance Culture and is also a crystal therapist master teacher with Apothecrystal.

‘I found a room in a Victorian mansion in New Barnet sharing with nine others and stayed there until a few weeks ago when we all had to move out.

‘Fortunately, this house came up almost immediately and I now share with just one other guardian. We’re well looked after and have to abide by rules such as no candles or overnight guests, and there are regular inspections.

‘Property guardianship seems to attract lots of creatives, and suits people who are clean and tidy, positive, respectful to others and their living spaces and open to change. How else could I live in a £10million house? It’s beautiful, peaceful and quite surreal, and I try not to worry about getting notice to leave.’

Find out more about being a Live-in Guardian here

Macaulay Cooper and Richard Young, both 27

Macaulay Cooper and Richard Young became friends while studying acting at The Arden School Of Theatre in Manchester.

After graduating in 2017 they moved away for a few years but were keen to come back to the city, as Macaulay explains.

‘I returned to my family in North Wales but at the end of last year Richard and I both decided we wanted to rent in Manchester. I have a Frenchie called Jax, so it was really important to find a pet-friendly home.

We looked at different places, both through private landlords and Build To Rent schemes, and found that on the private landlord side there were a lot of restrictions on having a pet, which put us off.’

Their search led them to Vox, Allsop’s Build To Rent development in Cornbrook, close to the centre.

‘We decided to go for a two-bed furnished apartment and initially signed up for a 12-month lease, but within a month of moving in we have already talked about extending because we are so settled and love it here.

The facilities are amazing, and there is space to work from home in the rooftop lounge with the benefit of superfast wifi throughout.’

They also like the relaxed lifestyle and feeling part of a community. ‘Everything is done in-house, so any problems are sorted straightaway and we don’t have to wait for agents to contact landlords to get things fixed, reducing stress and worry,’ adds Macaulay. ‘And everyone is so friendly and keen to get to know each other.

‘We have met neighbours on the roof terrace, and Jax is settling in well and loving the dog meet-ups. A number of social events, such as cocktail and games nights, have been arranged as lockdown restrictions start to ease. We would highly recommend a Build To Rent property as all the hassle is taken away and you have a chance to enjoy yourself and make new friends.’

A short walk from Castlefield’s waterside bars and restaurants, Vox (voxmcr.co.uk) comprises a mix of one, two and three-bed apartments.

Amenities include a residents gym, rooftop terrace and running track, lounge and car club. Pets welcome. Rents for furnished or unfurnished apartments start from £845pcm for a one-bed, from £1,055pcm for two-bed, and £1,400 for a three-bed with a wraparound corner balcony.

Rents: Two-bedroom house with garden in Chessington, Surrey, £1,600 a month

Stephanie O’ Kelly, who works for a cybersecurity distribution company, has been renting privately on and off since she left university.

She moved into a two-bedroom house in Chessington, Surrey, just over a month ago and hopes to stay put for the foreseeable future.

‘I had been in my previous home, a two-bed ground-floor maisonette with a small garden, for three years and when my landlord gave notice in January I had two main priorities,’ she says.

‘I wanted to stay in the area as my Mum lives here, and I needed an unfurnished house with a decent-sized garden where my son, Blake, who’s two-and-a-half, could play. I had up until the end of June to find somewhere, but a friend spotted this place on Rightmove and I contacted the agent and viewed it straightaway.

‘Fortunately I came to an arrangement with my former landlord and was able to leave quickly without being out of pocket. The house is in good condition — apart from a few minor issues — and I like the way it’s decorated. I’m able to put up pictures and mount the TV on the wall but I had to buy a new bed as mine wouldn’t go upstairs, and separate my corner sofa into two pieces as it wouldn’t fit into the living room.’

Although Stephanie has plenty of experience in renting, she doesn’t feel that tenants are treated any better than when she started out.

‘We had mould and damp in my last home as it wasn’t property ventilated, and Blake kept getting colds, but I had to chase and chase the letting agent to contact the landlord,’ she says.

‘When I moved into the property before that, I was pregnant and was assured that I’d be able to stay there long term, then found out that it was being put on the market when I’d only been there a few months. There are some real horrors out there — one house I viewed had great pictures but actually looked like a drug den.’

She doesn’t consider renting to be a lifestyle choice. ‘I do it out of necessity. I’d like to buy but wouldn’t have a chance in hell of finding anywhere even with a mortgage of five times my salary, and it’s hard saving a deposit when I’m paying out so much every month.

‘Landlords have all the power in their hands, but the fact that I’m renting from someone who bought the house as an investment gives me confidence that he won’t want to sell it anytime soon.’