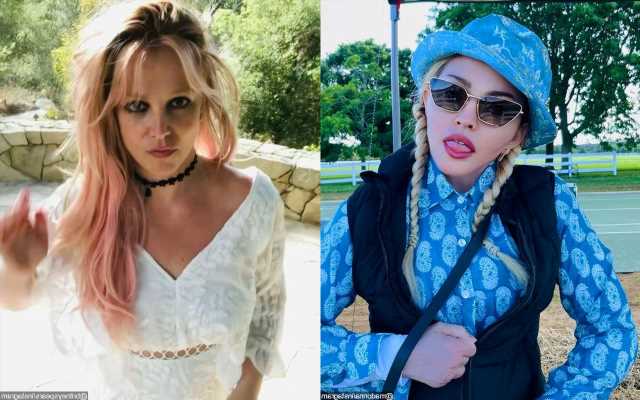 Taking to Instagram Story, the ‘Like a Prayer’ singer shares a lengthy message for her fellow pop star as she calls the conservatorship ‘a violation of human rights!’

AceShowbiz –Madonna joins other celebrities to show support for Britney Spears amid the latter’s ongoing conservatorship drama. Taking to Instagram Story on Thursday, July 8, the “Like a Prayer” singer shared a lengthy message for her fellow pop star.

“Give this woman her life back,” so Madonna began her statement alongside a picture of herself wearing a top that read “Britney Spears” in purple letters. “Slavery was abolished so long ago! Death to the greedy patriarchy that has been doing this to women for centuries.”

Concluding her impassioned message, Madonna believed that the conservatorship “is a violation of human rights! Britney we coming to Get you out of jail!”

Meanwhile, things were not looking good for Britney as a judge turned down her request to end the conservatorship. Recently, his father Jamie Spears revealed that he has received “innumerable” death threats for years amid their conservatorship battle.

In a new court filing, it was stated that the 69-year-old “has been the subject of innumerable and ongoing threats as well – not just recently, but for years.” It was also noted that he is “very concerned” about the “dangerous rhetoric that has been circulating for quite some time” surrounding his daughter’s conservatorship.