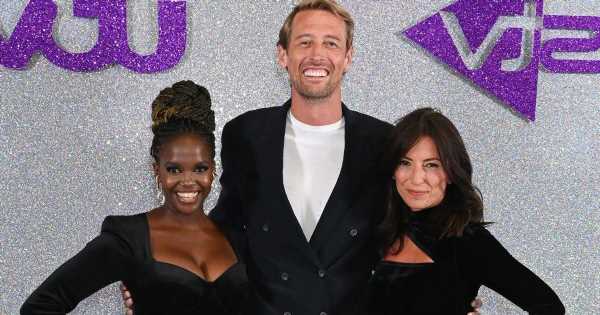 As The Masked Dancer is set to take over our screens this Autumn, it's clear there is strong camaraderie between this year's panelists who told us about a mishap at a recent press call.

Presenter Davina McCall, who is on the panel alongside Peter Crouch, Oti Mabuse and Jonathan Ross, revealed when posing for pictures earlier day there was an awkward moment with Peter.

"Earlier, me and Oti were having our pictures taken and we put our arms around Peter’s waist and we realised we were both hugging his bottom," the 54 year old said when speaking to OK! at the ITV Autumn Entertainment launch yesterday at White City House in London.

"I was like, ‘Sorry!’ I was literally cupping his buttock!"

"With Peter it literally comes to his knees. It’s so weird seeing so much space between the legs above the table."

The series sees a host of celebrities dress up as characters such as tomato sauce and sea slug, as the panelists attempt to guess who is behind the mask.

While resident Masked Singer star Mo Gilligan has been unable to take part in this series, Peter has joined the panel in his absence.

"He's really taking it seriously. He's a sportsman so he wants to win and that’s made him a great sportsman and also a good detective on the show. He's very good at it. He just loves piecing together all of the clues."

And Peter, who is making his debut on the show said his children, Sophia, Liberty, Johnny and Jack, are particularly excited about his appearance on the ITV series.

"I played football for England and Liverpool, I played in Cup finals, played in the Premier League and played in World Cups but my kids, the only thing they want to talk to me about is The Masked Dancer. They absolutely love it. They came and watched one of the shows and absolutely loved it and it's all they’ve talked about since."

And the star has even got the seal of approval from Mo, who can't make the series due to touring commitments.

"I’ve met Peter before and I know he’s got a couple of moves and it’s great," the comedian said. "He’s definitely holding it down."