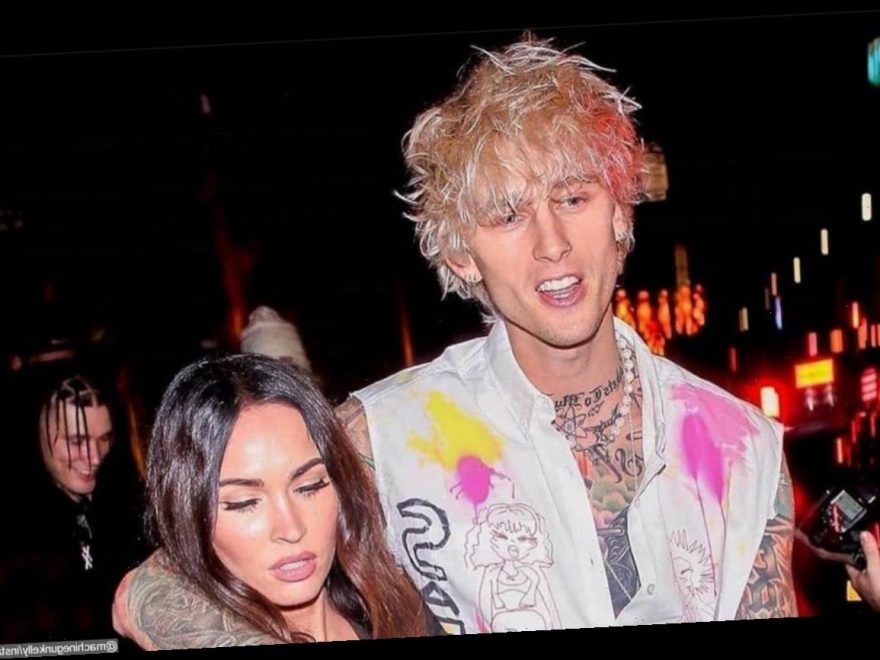 The ‘Teenage Mutant Ninja Turtles’ actress is spotted wearing a new diamond ring on that finger when arriving at ‘Saturday Night Live’ studio with her boyfriend.

AceShowbiz -Are Megan Fox and Machine Gun Kelly taking their relationship to the next level? The 34-year-old actress has sparked rumors that she got engaged to the 30-year-old musician with her new accessory.

The former “Transformers” star was spotted wearing a diamond ring on that finger when she arrived at Rockefeller Center in New York City on Thursday, January 28 with her 30-year-old boyfriend. She sported the huge sparkler on her left ring finger which was caught on camera as she stepped out of a black car, raising a speculation that he may have popped the question to his girlfriend.

Megan kept it stylish during the outing, wearing a black coat, pants and shoes in matching color. She also had cute pink cat ears sitting atop her head, while carrying a pink cheetah print cardigan and a blue water bottle.

Megan was there to accompany MGK, who came for a rehearsal for his upcoming appearing on “Saturday Night Live“. The rocker is set to make his debut as a musical guest in the Saturday, January 30 episode of the NBC sketch series.

For the occasion, the “Hold On (Shut Up)” singer bundled up in a black puffy jacket and a black jumpsuit tucked into rubber boots with pink soles. Being a gentleman, he was seen holding the SUV’s door open for his lady.

Megan and MGK were first rumored to be romantically linked after she filmed a music video for his song “Bloody Valentine”. They confirmed their relationship in June 2020, just a month after she and her estranged husband Brian Austin Green announced their split.

The former “New Girl” star and the “Beverly Hills, 90210” alum dated on-and-off since 2004 before they got married in 2010. They share three sons together, Noah Shannon Green, Bodhi Ransom Green and Journey River Green.