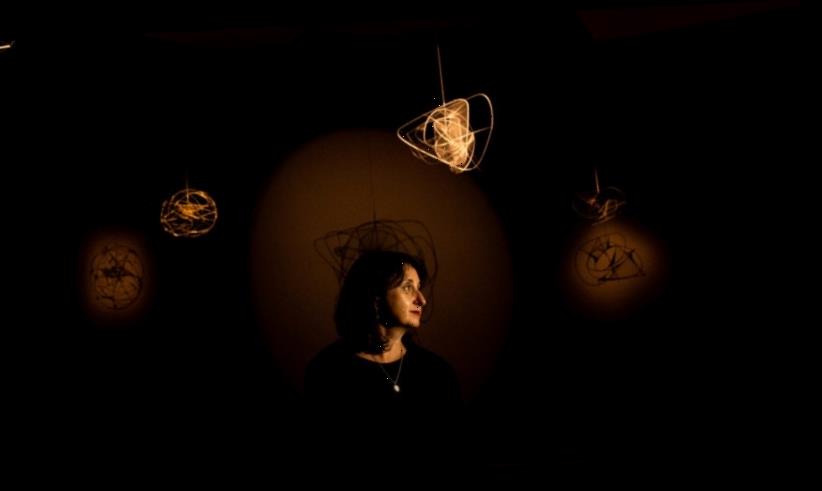 If you live in Sydney, you’ve probably seen Margel Hinder’s work many times, even if you haven’t realised it.

The artist created the abstract sculpture, made of cast copper with a steel core, that was installed in front of the Reserve Bank in Martin Place in 1964.

The Art Gallery of NSW’s senior curator of Australian art Denise Mimmocchi said Free Standing Sculpture changed the public’s perception of sculpture. “It’s surrounded by that precinct of sculptures of monarchs and statesmen,” she said.

A large maquette of the work features in the retrospective Margel Hinder: Modern in Motion that opens at the Art Gallery of NSW on Saturday. 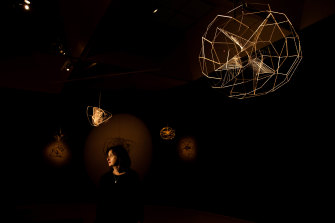 Curator Denise Mimmocchi at the Margel Hinder exhibition at the Art Gallery of NSW.Credit:Janie Barrett

Three joint retrospectives of Hinder and her husband Frank Hinder’s work have been held, including one at the AGNSW in 1980, but this is the first solo retrospective of her work. Mimmocchi said while the pair had an incredible partnership, she wanted to single out Hinder as her sculptures had been neglected by galleries in recent years. 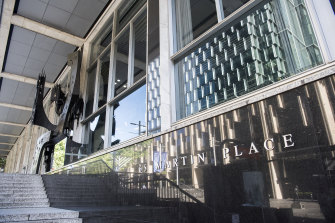 During her lifetime, Hinder, who died in 1995, worked on several public monuments and sculptures and was the first woman to be awarded the Blake Prize for Religious Art in 1961. She was appointed a Member of the Order of Australia for her services to art in 1979.

“I think in reality it’s harder to get a sculpture show up at galleries,” Mimmocchi said. “Sculpture in the 20th century is a bit of a neglected medium. [Mounting a show is] more costly, more logistically complex. Sculptors don’t get the attention that our painters do.” 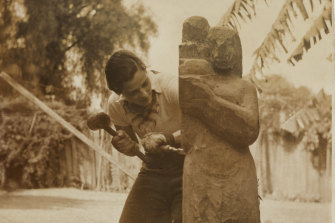 Margel Hinder working on Mother and Child in 1939.

Not all Hinder’s works have been well cared for, and models are often the only versions of her significant public sculptures that remain. The show includes a model for Hinder’s first public commission, made for a building in Pitt Street but later removed.

Mimmocchi said abstract sculptures like Hinder’s are part of the fabric of our cities but are often ignored and occasionally mistreated. Showing public sculptures in the wider context of Hinder’s groundbreaking career is a reminder that “there was artistic intention behind these works. They are beautiful aesthetic experiences and objects as well.”

Modern in Motion includes virtual models of two of Hinder’s public sculptures made by 3D artist Andrew Yip, including one of her most important, Civic Park Fountain, Newcastle (1961-66). The original setting of the work, including recently felled street trees, is recreated in detail.

Born in Brooklyn, New York in 1906, it was on the boat to Australia in 1934 that Hinder made her first modernist wood carving, a pivotal piece that is featured in Modern in Motion. Hinder’s studies in the USA were the foundation of her practice, but it was after moving here with Australian husband Frank that she became a pioneer of modern sculpture, at a time when there was little interest in the artform.

Hinder was dismayed at the small art community she found in Sydney compared to the one she had left behind. However the Hinders quickly banded together a group of likeminded, progressive-thinking local artists including Grace Crowley and Ralph Balson. The group organised an exhibition of abstract art in 1939, and Margel Hinder’s work from that show is also on display.

“We always think about modern art as this import…but it was really their practice[s] that established the principles of abstraction and modern art in Sydney,” Mimmocchi said. 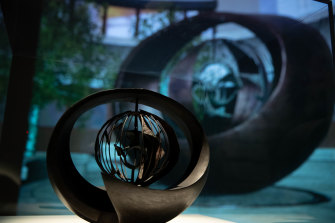 The Margel Hinter exhibition opens at the Art Gallery of NSW this weekend.Credit:Janie Barrett

The show tracks the shifts in Hinder’s approach across five decades, from wood carvings to intricate geometric wire sculptures, and monumental public art. Hinder had equal enthusiasm for dewdrops on a spiderweb and television towers going up in Sydney in the mid-1950s.

“It’s those dual energies that really inspired her – the natural world, and the human-made technological advances of modernity,” Mimmocchi said.

Margel Hinder: Modern in Motion is at the Art Gallery of NSW until May 2.