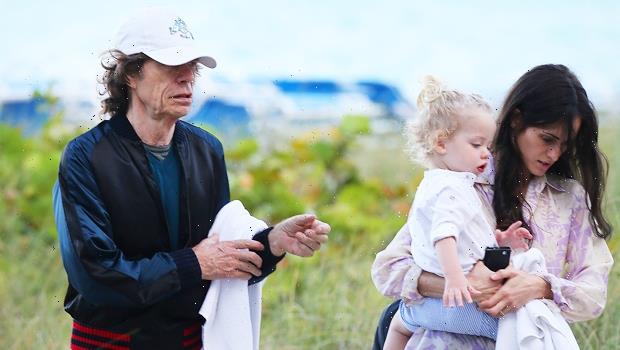 Melanie Hamrick shared a new snapshot with her Rolling Stones musician boyfriend and their son after her birthday.

Mick Jagger’s girlfriend Melanie Hamrick shared a rare new photo of her little family unit on Instagram on Sunday, July 18. In a post that thanked her followers for the birthday wishes over the weekend, the choreographer and former ballerina, 34, shared a photo with her Rolling Stones frontman boyfriend, 77, and their son Deveraux, 4, against an ocean backdrop.

“Feeling all the love today,” Melanie captioned the post. “Thank you everyone for the wonderful messages.” In the snapshot, Melanie gives Mick a smooch on the cheek while their son is sandwiched between their legs. Little Deveraux can be seen holding his dad’s hand and flashing a smile.

Mick and Melanie have been dating since 2014. Page Six previously reported that the duo met in Japan while the Rolling Stones and the American Ballet Theatre were both touring in the country. The couple welcomed Deveraux, their first child together, in 2016. Mick also shares seven other children, Lucas, 22, Jade, 49, Georgia May, 29, Karis, 50, Gabriel, 23, James, 35, and Elizabeth, 37,  with various other former partners, including Jerry Hall, Luciana Gimenez, and Marsha Hunt.

Some of his children and even former partners appear to have a good relationship with one another. Last month, Lucas visited his step-sibling Georgia May in Los Angeles and spent some time around the city, including visiting some stores and enjoying some ramen together. Georgia May simply captioned the June 23 IG post, “Lucas in LA.”

In Melanie’s comments section, too, for her most recent birthday photo with her rocker beau and son, Luciana, who shares son Lucas with Mick, wished Melanie a happy birthday and left a heart emoji.

In an interview with Marie Claire in 2017, Melanie opened up about how “insulting” it was to be labeled as Mick’s “baby mama.” The dancer said, “I definitely don’t think of myself as a ‘baby mama,’” she said. “Yes, in the technical sense, I’m not married to the father of my child. But I am in a great, wonderful relationship with him. So I don’t see myself like that.”

“I have a career. I work hard,” Melanie continued. “Since I was 18, I’ve supported myself. I’ve put my whole life into my work. I dance with one of the most well-known ballet companies in the world. To be put in that category is a little insulting.”