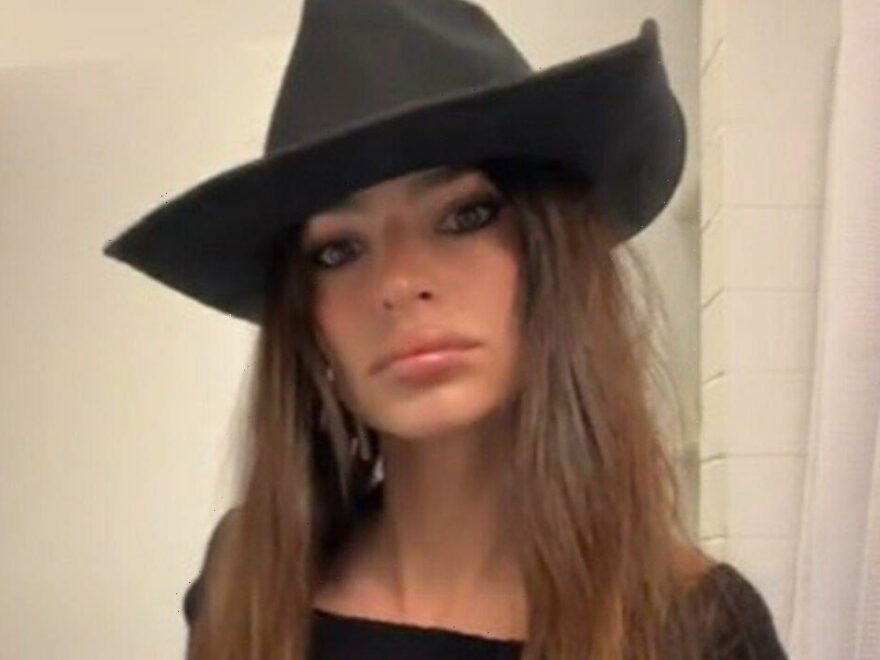 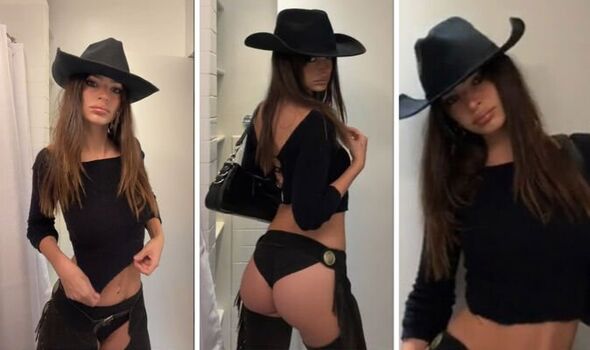 ‘Hardcore girls!’ Emily Ratajkowski shows off her figure in barely there Halloween costume

The young supermodel posed in her sassy cowgirl costume on both her TikTok and Instagram account. Showing both the front and the very revealing back of the costume, Emily was seen strutting around NYC. She captioned the video “hardcore girls”

Emily Ratajkowski posted a cheeky video on her TikTok showing off her all black Halloween costume for this year’s spooky festivities.

The 31-year-old supermodel strutted her stuff to a voice over from iconic chick flick Mean Girls whilst wearing a tiny long sleeve black top and black chaps, which barely covered her perky behind.

Posting another video on the social media site, where Emily boasts 1.9 million followers, Emily wrote the caption: “Revenge era obviously,” whilst filming herself in a large bathroom mirror.

The star then took to the streets of New York City with a friend who was dressed as the sun and continued to pose. Emily’s flawless figure was once again on show as she wiggled her petite behind and strutted across a zebra crossing.

Posing in the camera and showing the front of her costume, Emily’s striking figure and toned stomach poked out between the end of her black long-sleeve top and the start of her frilled chaps, which were paired with a large cowboy inspired belt.

Looking over her shoulder, Emily Ratajkowski danced to Taylor Swift

Showing a 360 angle of her costume, Emily dubbed the video with a song from Taylor Swift’s latest album Midnights. Named “Vigilante Sh**” the lyrics of the song include the phrase “Lately I’ve been dressing for revenge,” which matched the supermodel’s caption of the video which read: “Revenge era obviously.”

Wiggling to the camera Emily Ratajkowski bares her assets

Seductively wiggling her bottom and walking across a street, Emily drew attention to her impeccable figure once again. Her model-like long legs and toned abdomen was perfect to pull off her cowgirl outfit, while her friend rocked a bright yellow over the head sun costume.

Emily Ratajkowski’s videos were showered with praise from adoring fans

With 29.5 million followers on Instagram, Emily’s post was not shy of comments from adoring fans and celebrity faces. Singer Halsey commented: “ma the CHEEKS what’s the routine” (sic) complimenting the star’s physique and asking for her fitness tips.

Gaining more than 200,000 likes on her TikTok video, Emily’s fans showed their love of the supermodel in the comments section. One cheeky fan under the username Frances commented: “I saw the sun and the moon” in relation to the star’s behind. Another commented: “I’d wear that every day if that was my body. You look amazing!!!”

Stealing the lyrics from one of Taylor Swift’s latest releases, Karma, Emily was praised by the singer herself. In another video posted to her TikTok, the supermodel lip synced to the song whilst posing and dancing with her friend and their pet dogs. Dressed all in black with a striking red lip, Taylor Swift herself commented on the video saying: “Standing ovation for this.”