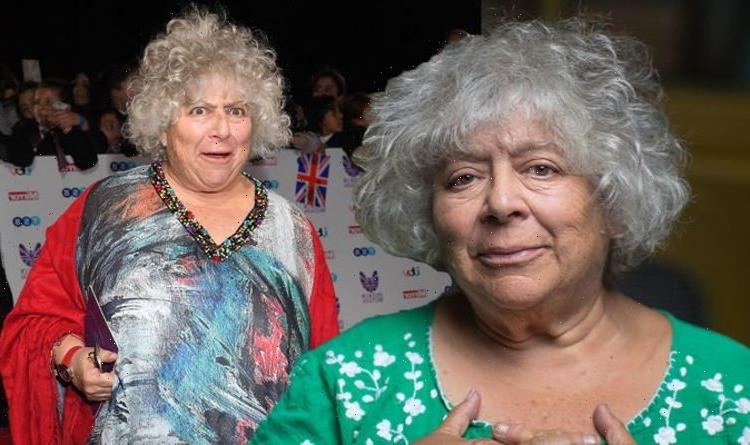 Miriam Margoyles, 80, has said in her new memoir This Much is True that she only sees her partner Heather Sutherland around eight times a year. She believes this is why the couple have had such a long and blissfully happy relationship.

It is a big achievement.

The actress said in an extract obtained by the Mail: “We have now been together for 53 years.

“It is a big achievement.

“An academic and a scholar, Heather is my polar opposite: reticent, incredibly private and reserved. We’ve probably lasted this long because we have always led completely separate lives.”

Miriam then went on to explain what is so separate about the couple’s lives.

She said: “To begin with, Heather, who is Australian, was working in Malaysia, but for many years she has been in Holland.

“Normally we see each other about eight times a year, but speak every day on the phone.

“We have never lived together for long periods, except when we had holidays.”

Miriam told readers that they have thought about living together but think they will only do that when they move into an old people’s home.

The actress met Heather in 1968 through a mutual friend, and have been together ever since.

She said: “Next to getting into Cambridge, that was the best moment of my entire life.”

A week after this, Miriam told her mum that she was gay.

Her mother immediately told her father, and was asked to meet him in the drawing room to discuss the matter.

Miriam said: “She and my father insisted I come into the drawing room and swear on the Torah never to have relations with a woman again.

“I did as they asked, but I broke my promise.

“I stayed with Heather because I loved her, because my whole soul cleaved to her, it would have been impossible to stop.”

Miriam blames herself for her mothers strokes, which happened a couple of months after these events.

She blames herself as her parents could not accept what she had told them, with her mother isolating herself from her.

Miriam was the recipient of a BAFTA Award for her role in Martin Scorseses’ The Age of Innocence.

She is also very well known for playing Professor Sprout in the Harry Potter film series.

This Much Is True by Miriam Margolyes, published by John Murray on September 16, £12. You can buy the book here.