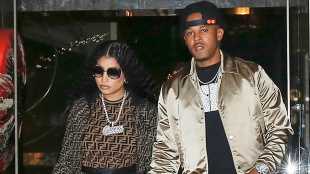 Nicki Minaj isn’t mincing words when it comes to her relationship with Kenneth Petty. She doesn’t care about him not having money. He keeps her happy and satisfied.

Nicki Minaj had a message for the haters bashing her relationship with boyfriend Kenneth Petty. Nicki’s boyfriend, whom she made things Instagram official with in December 2018, is a convicted felon. But Nicki has looked past that and frequently defends her man. She did so again on the July 26 episode of her Apple Beats 1 show, Queen Radio, telling her fans that she really doesn’t care what anyone else thinks; she loves Kenneth even if he’s not rich and famous. “When a person is with a n—- that loved them before they had a dime in their pocket? How do you not understand that? How do you not understand happiness vs clout? How f—ing dare you talk about lowering standards,” she said. Nicki added that she wants “you hoes to wake up” and realize this. “It’s the truth, money cannot buy me happiness and good sex.”

Nicki said in the past that she and Kenneth, her “soulmate,” have known each other since they were 15-year-olds in New York City. She tweeted on June 23, “He won’t even say the word ‘Nicki.’ He has called me Onika since I was 15 so it’s hard to change that. I wouldn’t date anyone cuz I’m about to be married to my soulmate. But that was the problem, others r infatuated w/ Nicki Minaj he DGAF about this industry & is very protective.” This wasn’t the first time that Nicki stated that she and Kenneth are getting married. She’s said this frequently, and once straight up told fans that they were picking up a marriage license, but they’ve never publicly announced an engagement or wedding date.

Fans think she confirmed it, though, along with a pregnancy, in her verse on Chance The Rapper’s new song, “Zanies and Fools”. She raps, “He the Clyde to my Bonnie, ’bout to walk down the aisle and be a mommy,” and “Ooh, I remember when I cried like, ‘Why me?’ / Now I wouldn’t exchange my life for Armani.” There’s no doubt that these lyrics are about Kenneth. She posted them on Instagram as the caption to a pic of them together.

HollywoodLife reached out to Nicki’s rep for comment but did not hear back as of press time.