Kim Kardashian was filming an ad on Instagram when her daughter North West interrupted and hilariously accused Kim of talking ‘different’ in her social media videos.

North West, 8, has got some jokes! The eldest child of Kim Kardashian, 40, and Kanye West, 44, hilariously poked fun at how her mom talks while Kim was promoting BoxyCharm in an advertisement on her Instagram Stories on Wednesday, Sept. 8. “Why do you talk different?” North asked the SKIMS founder, just after she finished speaking to her followers for the ad video. “Why do I talk different for what?” Kim responded to her daughter, which led North to accuse the billionaire of changing her voice for her “videos.”

“For my videos? I’m the same human being,” Kim insisted. But North wasn’t done picking on her mom just yet, and when Kim asked North how she speaks in the videos, the 8-year-old did an epic impersonation of her mother. “Guys, so today I got this new mask, and these new bronzers, and I got this,” North said while emulating Kim’s voice. However, Kim had a hard time believing that’s what she sounds like, and asked her niece Penelope Disick, 9, who was hanging out nearby, if North’s claims were indeed true.

Penelope, the daughter of Kourtney Kardashian and Scott Disick, simply shook her head at Kim, thus siding with her cousin North over her aunt regarding the voice debate. Kim then quickly shifted the conversation to give her fans a look at Penelope and North’s current activity, which was decorating fruits with makeup and eyelashes from KKW Beauty to make them look like real faces. “That is really creative,” Kim said as she chuckled to herself. “Thanks, I’m so glad my beauty products can be used.” The mother of four also instructed North to clean up after the beauty job, telling the cute cousins, “I’m mad when you make a mess.” 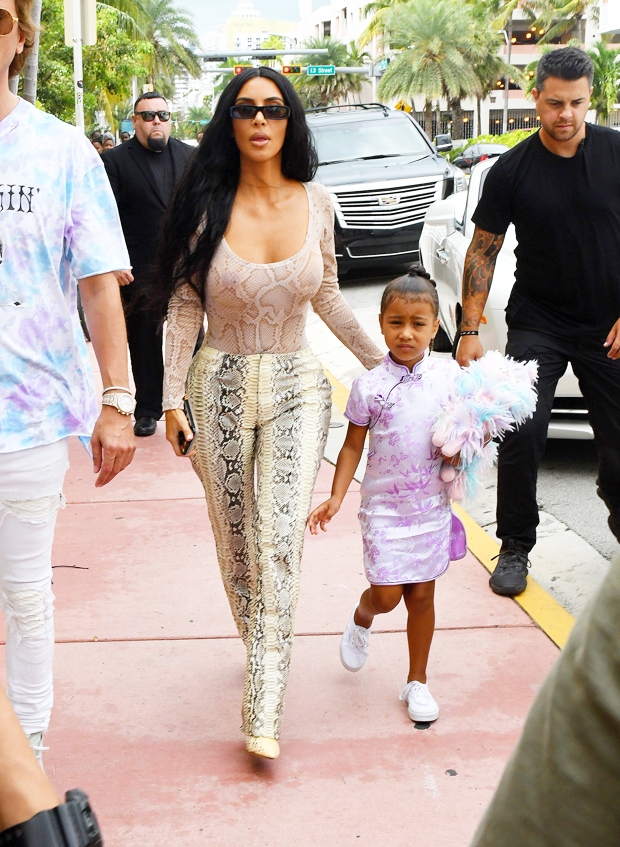 Kim has a very special relationship with her daughter North. The reality star — who also shares kids Saint, 5, Chicago, 3, and Psalm, 2, with Kanye — tends to document her fun moments with North on social media, and that was no different when it came time to ring in North’s 8th birthday in June. For that loving occasion, Kim posted a string of snapshots of the mother-daughter duo in vintage apparel.

“My first born baby North is 8 years old today!” Kim wrote. “North, one day you will see these messages all printed out for you in the books I am making for you and I so hope you feel the love because you bring so much love and joy into all of our lives!”