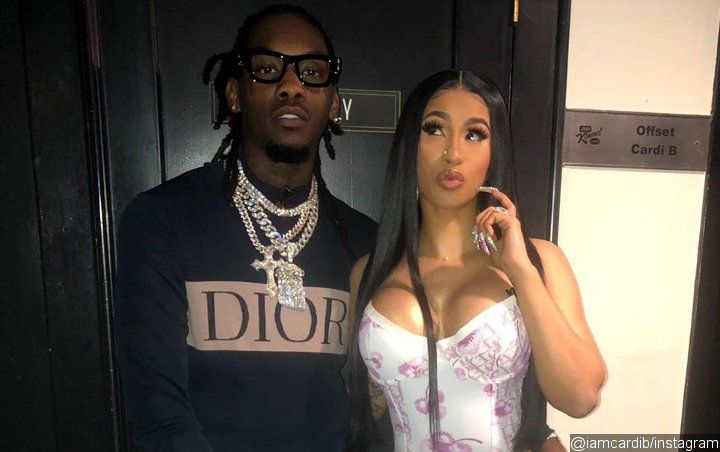 Through a post on Instagram, the Migos rapper shares a snapshot of his Facetime with his ‘I Like It’ hitmaker wife during which she shows him a new ink etched on her leg behind the knee.

AceShowbiz –Cardi B has marked her love for husband Offset by getting his name inked behind her knee.

The “I Like It” hitmaker is no stranger to tattoos and has an extensive collection, including a cat and a cheetah on her hip, “Loyalty Over Royalty” on her bicep, and a hand making the American sign language gesture for “I Love You” behind her right ear.

But Cardi decided to celebrate her love for her Migos star spouse with her latest addition – and chose a somewhat unusual position for the new design.

Offset showed off his wife’s new ink in an Instagram post on Sunday (July 21), which showed the rapper FaceTiming his other half, as she lifted up her leg to display her new tattoo – written in a black swirling font behind her knee.

“CANT WAIT TO GET HOME,” Offset cheekily captioned the snap.

Cardi’s permanent display of affection for her husband comes after he showed his love for the “Bodak Yellow” star by having her moniker etched on his neck.

It’s not the first time Cardi has had a tattoo tribute to a partner – she previously had the name of her then-boyfriend Tommy Geez inked in red on her wrist as she pined for him while he was in jail. It’s unclear whether or not she still has the design on her wrist.