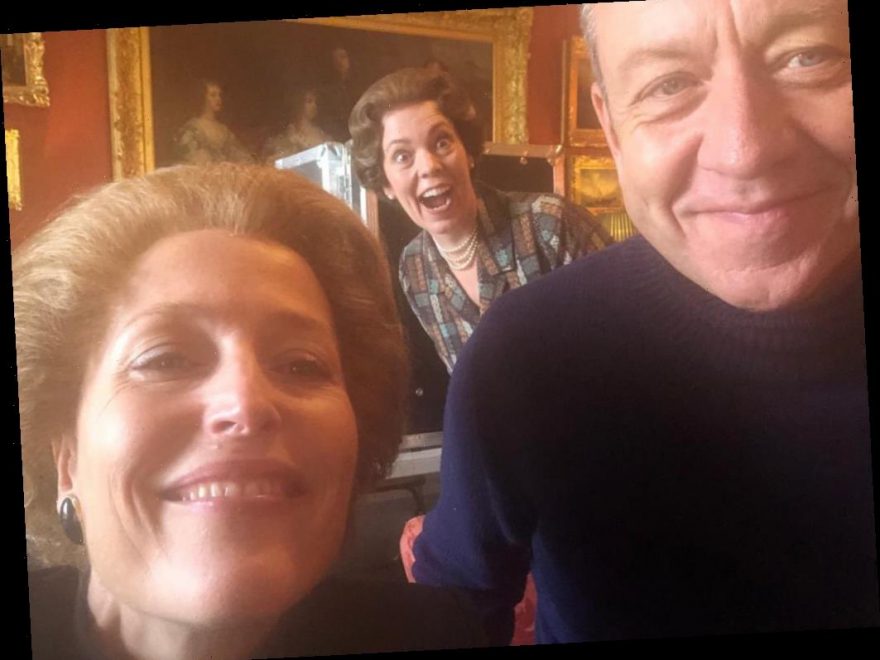 Onscreen, Olivia Colman is resolutely reserved as Queen Elizabeth on The Crown — but behind the scenes, she let her silly side show.

Gillian Anderson, who plays Prime Minister Margaret Thatcher on season four of the Netflix drama, shared a fun snap from the set on Twitter Wednesday. In the selfie with her boyfriend and series creator Peter Morgan, Colman (in costume as the Queen) crashes the picture with a funny face.

"The Queen of photo bombs," Anderson captioned the post.

In honor of the season's premiere on Sunday, Anderson shared a number of personal photos from her first day of filming, including photos of Thatcher to serve as inspiration in the hair and makeup room and a mirror selfie.

Colman — who won an Oscar for her portrayal of another royal, Queen Anne, in The Favourite — previously revealed that she doesn't have much in common with the real Queen Elizabeth and worked hard to emulate the monarch.

"I did have a movement coach," the actress previously said on The Graham Norton Show. "But still I walked like me, or rather like a farmer!"

Colman will be handing the "reigns" over to Imelda Staunton, who will take over the role of Queen Elizabeth in The Crown's final two seasons.

"If she calls me, I'll be so excited. Then what would you say to Imelda Staunton?" Colman said in a press conference. "Good luck…the wig's itchy."

Colman also suggested Staunton practice her regal walk, before admitting that the Harry Potter and Downton Abbey actress has "already got a much better walk than me."

Keeping with their system of replacing actors as their characters age through the decades, The Crown has cast Jonathan Pryce as their Prince Philip for seasons 5 and 6 (following in the steps of Matt Smith and Tobias Menzies) and Lesley Manville as Princess Margaret (taking over from Vanessa Kirby and Helena Bonham Carter). Australian actress Elizabeth Debicki will take over the role of Princess Diana from Emma Corrin.