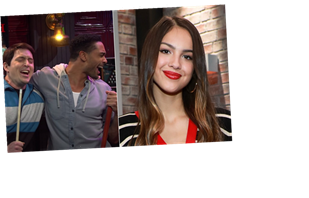 Olivia Rodrigo’s 2021 keeps getting better. When the High School Musical: The Musical: The Series star celebrated her birthday on Saturday, Feb. 20, she received an unexpected late night shout-out based on her hit single. Saturday Night Live paid homage to Rodrigo’s smash song, and Olivia Rodrigo’s reaction to SNL‘s "Drivers License" sketch confirmed it was the ultimate birthday present for the singer.

The sketch opened on several gruff men playing pool in a bar. One of them, played by guest host Regé-Jean Page (of Bridgerton fame), surprised his friends by playing "Drivers License" on the jukebox. "Sounds like some teen girl singing in her room with a piano," Mikey Day’s character scoffed, to which Page replied, "That’s the beauty of it. You got a problem?"

But soon, the other guys became super moved by Rodrigo’s single themselves, recounting the Rodrigo/Joshua Bassett/Sabrina Carpenter love triangle drama and recalling their own painful break-ups. "It’s like she ripped a page out of my diary," Beck Bennett’s pool player admitted, before quickly trying to sound macho again by adding, "I mean notebook. I mean plain brown leather. I can’t read or write!"

The friends even argued about which other musicians influenced the catchy tune, from Billie Eilish to Rodrigo’s own idol, Taylor Swift. "It’s also pure Olivia, man," Page insisted. But when the song’s emotional bridge kicked in, they all dropped their tough fronts and belted along, putting their arms around each other as the music swelled.

It was certainly one of the standout sketches from the Feb. 20 episode, and Rodrigo was clearly thrilled about the comedy tribute airing on her 18th birthday. "DRIVERS LICENSE SNL SKETCH IS THE BEST BIRTHDAY PRESENT EVER IM SHAKING," she tweeted shortly afterward.

Her single has been a smash-hit since it was released on Jan. 8, so it makes sense that Saturday Night Live finally referenced it. "Drivers License" was a big deal, reaching the top of the Billboard Hot 100 Charts and even breaking the Spotify record for most streams in one week. And that’s not all: The star has also revealed she has a clear vision for her first-ever album.

“I want it to be super versatile,” she said in a Feb. 4 interview with Nylon. “My dream is to have it be an intersection between mainstream pop, folk music, and alternative rock. I love the songwriting and the lyricism and the melodies of folk music. I love the tonality of alt-rock. Obviously, I’m obsessed with pop and pop artists. So I’m going to try and take all of my sort of influences … and make something that I like.”

Rodrigo’s future in the music industry is bright, and who knows? Maybe she’ll show up on SNL as a musical guest sometime soon.