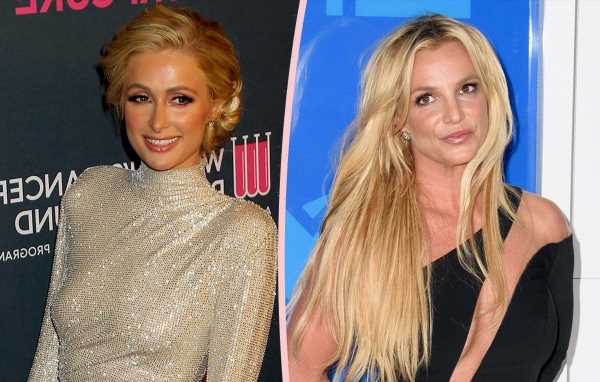 Last month Britney Spears shocked the world with her testimony in the latest hearing on her conservatorship.

The Toxic singer not only confirmed what the #FreeBritney camp have been claiming for months, that she desperately wanted out of the legal binding, she also made some pretty astounding claims about how she was being treated — including being forced to keep an IUD birth control device inserted so she could not have more children.

While most people believed her, there has been some pushback from those who don’t trust her words — specifically because she’s under a conservatorship which in itself implies mental health issues. Kind of a catch-22 there, isn’t it? How does anyone ever prove they’re ready to end their own conservatorship?

Anyway, you can’t say not being believed surprised Britney. The 39-year-old even explained in her testimony part of the reason she had been afraid to come forward: Paris Hilton.

Using her old friend as an example, she said she didn’t even believe the story of abuse at the Provo Canyon School:

“To be honest with you, the Paris Hilton story on what they did to her to that school, I didn’t believe any of it. I’m sorry. I’m an outsider, and I’ll just be honest. I didn’t believe it. And maybe I’m wrong, and that’s why I didn’t want to say any of this to anybody, to the public, because I thought people would make fun of me or laugh at me and say, ‘She’s lying, she’s got everything, she’s Britney Spears.’”

She really thought we’d laugh at her. We’re mortified. As a society we should all be ashamed that’s what she thought.

Well, one person who wasn’t upset at all about the comparison was Paris herself.

At first she didn’t say anything about being doubted so publicly but instead let her Twitter likes do the talking, seemingly endorsing several fans who said Paris shouldn’t take it personally because Britney wasn’t calling her a liar. Now the DJ heiress is making that sentiment explicit. On the latest episode of her podcast, This Is Paris, she comes right out and addresses the controversy, saying:

“A lot of people want to ask me about that, it’s all over social media and I know that she didn’t mean it that way.”

How did Paris read the statement?

“She meant when she saw it, she couldn’t even believe it. What she said was, when people hear that, they go, ‘Oh, it’s Britney Spears, it’s Paris Hilton, they have these perfect lives.’”

She thinks Britney meant it to say:

“‘I didn’t even believe Paris, so who is going to believe me.’”

We agree! That’s definitely how we read it. However, does she still not believe Paris? We’re not sure, tbh. But one thing is for sure, Paris believes Britney. To make sure the message didn’t get lost, she posted a clip of the convo from the podcast on her Twitter, writing:

“I will always support and love Britney. She is so kind and sweet, and she deserves her freedom. I’ve been saying #FreeBritney for a long time, and I will keep saying it until she is free.

We all need to use our voices to protect victims of abuse.”

Speaking more generally about her friend’s heartbreaking testimony, she said:

“That was hard to hear, just her whole testimony, like I knew she was being controlled but not in ways like that.”

Referring again to her own story of abuse, she added:

“Dealing with it as a teenager was hard, but I can’t imagine still as an adult, after working your whole life, she’s built a huge empire, she’s a legend, she’s an icon, she’s a mother, she’s amazing, and she has these people controlling her money, her life.”

See more of the Britney talk (below):

Love to see the solidarity!