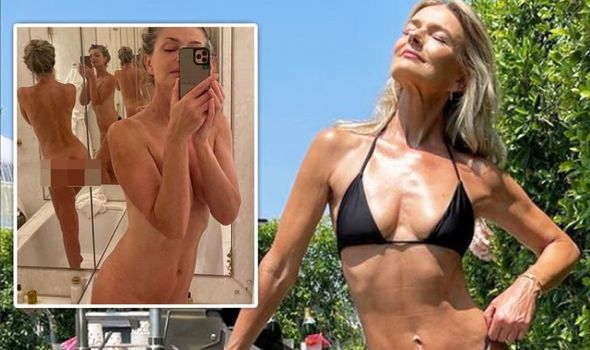 Paulina Porizkov said she tries to put herself out there and flirt with men but claims they often just away from her. The 56-year-old’s admission may seem hard to believe given the sensational looking bikini snaps she regularly shares with her 677,000 followers on Instagram.

The former supermodel is regularly inundated with compliments about her youthful look and toned physique by many of her fans.

Paulina rose to fame at just 18 years old as the first Central European woman to be on the cover of the Sports Illustrated swimsuit issue.

Despite still being confident though, the mother-of-two said younger men haven’t been interested in her.

She said: “I am now completely invisible.

“I walk into a party, I try to flirt with guys and they will just walk away from me mid-sentence to pursue someone 20 years younger.”

The former model added she was “very single” and despite dressing up and talking to men, she had nothing back.

Paulina’s long-term marriage to Ric Ocasek came to an end in 2018 before his death a year later.

The former couple have two children together; Jonathan and Oliver.

Paulina said her marriage came to an end after he was “no longer interested”.

She added to The Times: “I started looking around, I realised I was invisible to the population at large. It made me feel really terrible about myself.”

Wanting to put a stop to ageism, Paulina said she will not stop sharing racy snaps online, despite some criticism.

“I look good,” she said with confidence.

Such snaps, including nudes, however have come with some backlash with many telling her to put her clothes back on.

The model went on to say she didn’t realise how “shocking” it would be for somebody of her age to get back into swimwear that still fits her 30 years on.

“Do I feel sexier? Oh my God, yes. But what I am not any more is femininem” she added.

“I am not a fluttery, vulnerable creature. I am an active participant, an instigator.”

The brunette beauty has called for more women her age to feel more confident in their skin and not shy away from embracing their age and bodies.

The catwalk queen particularly wished she saw more women who are not afraid to keep their marionette line and crow’s feet.

On having a face lift done, she previously said: “Just because you can doesn’t mean you should.”

Paulina also claims she has never had had fillers or botox and relies on non-invasive plasma pen sessions, tightening ultrasound therapy and hydra facials to keep her youthful look.

To stay fit, she regularly does Pilates and used to take up boxing before getting hip athritis.