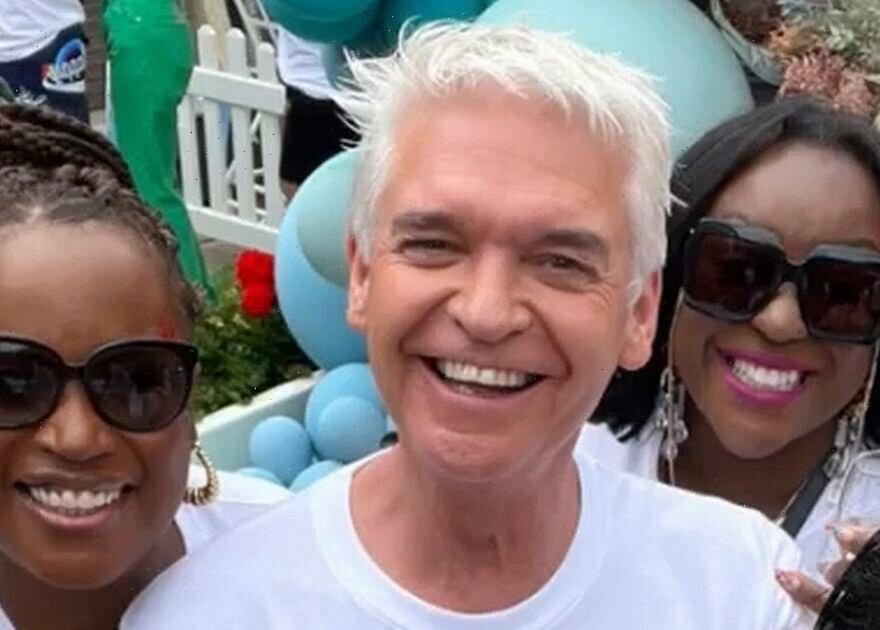 Phillip Schofield couldn't have looked any happier as he attended his first Pride event since going public with his sexuality two years ago.

The host of This Morning, 60, attended the London celebrations on Saturday, 2 July, along with his ITV colleagues.

The capital's streets were awash with rainbows, glitter and sequins as the parade began at Hyde Park Corner and carried on into Trafalgar Square, before finishing at Whitehall Palace.

It's believed more than a million people joined in on the event and, judging by Phil's collection of snaps, it's likely he'll be joining the same people next year.

In his first post of the day, Phil posed with Alison Hammond who was wearing a rainbow hued dress and sparkly slacks.

Meanwhile, Phil kept is casual by wearing a pair of blue jeans and a white T-Shirt with the ITV logo in Pride colours.

He captioned the snap: "A day with the legend that is @alisonhammond55".

Shortly afterwards he posted a selfie taken by Alison, which featured himself and Loose Women's Judi Love, Charlene White and Linda Robson.

The second story was captioned: "Me & the girls [red heart emoji]".

Phil then posted a group photo of all his ITV Pride colleagues, including Lorraine Kelly, who appeared to be having a great time too.

Recapping his day, Phil wrote: "What a wonderful and inspiring day. Thank you to my amazing friends and it @itv for looking after me.

"And if I saw you, thank you for the smiles [red heart emoji] #itvpride".

Then, rather unexpectedly, Phil's day ended with him getting a TukTuk ride home with Gok Wan because "there were no cabs".

He posted a video of himself and the fashion expert enjoying the unusual form of transport, with Gok shouting: "Happy Pride!"

Phil wrote: "And then….. I ended up in a TukTuk with @therealgokwan because there were no cabs".

After nearly 27 years of marriage to his wife Stephanie Lowe, Phil bravely made the decision to come out publicly as gay in February 2020.

The couple still appear to be good friends as they were spotted enjoying a glass of champagne together at day one of Wimbledon.

Talking to The Mirror, Phil previously explained that he and Steph have no plans to divorce.

Discussing their relationship Phil said: “We’re picking our way through. It’s a work in progress."

Adding: “I’m still married to Steph. With divorce… we’ve not discussed that at all.”