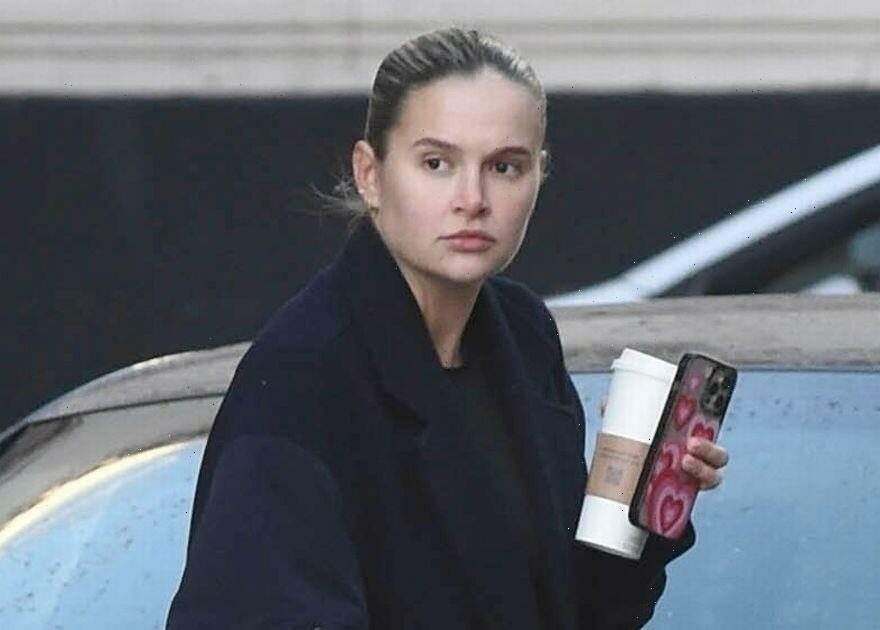 Molly-Mae Hague has been spotted running errands in Manchester ahead of the arrival of her baby girl.

The 23 year old, who is expecting her first child with boyfriend Tommy Fury, was seen wrapping up warm in a black jumper under a baggy navy blue coat that reached down to her ankles.

Pairing the look with some off-white jogging bottoms and a pair of ultra-short UGGs, the Love Island star carried a light grey handbag over one shoulder and held a large Starbucks cup alongside her mobile phone.

Styling her blonde mane back into a low bun, Molly-Mae appeared bare faced for the outing and seemed to be on a mission to get everything done before giving birth to her daughter.

During the drive over to the city centre, the pregnant star had taken to her Instagram stories to share a photo of her Starbucks cup and handbag, over which she wrote: "It's freezing," with a white cloud emoji.

She then shared a selfie where she could be seen sipping on the cup, which she placed a white heart emoji over.

It comes after Molly-Mae recently revealed her due date on her YouTube channel over the weekend, explaining that she's set to give birth in two weeks.

In a vlog posted to the social media channel, Molly-Mae showed off her baby bump, in what she said could be the final update before her daughter's arrival.

Showing her bump to the camera, the fashion mogul said: "Here I am. Here is baby girl, full term. I am now nine months pregnant."

Molly-Mae, who recently shared a peak into her indulgent beauty routine in the evenings, confessed she thought she'd actually be bigger, although other people disagree.

She revealed that while out and about during the day she bumped into some of the builders who worked on the home renovations, who said: "Bloomin heck have you not had that baby yet? It looks like you're carrying twins."

Quick to nip any rumours in the bud, Molly-Mae quickly clarified that she is not expecting twins.

Opening up about the journey she's gone on with her bump, she said: "All bumps, all different shaped and sized bumps are amazing."

Molly-Mae added that at the start of her pregnancy she wasn't particularly confident in her bump, but this has changed.

Later in the video Molly-Mae said that she was looking in the mirror and became shocked by how big she is, adding that this is a good a thing as she's "literally two weeks away from giving birth."